THOU SHALT NOT KILL… EXCEPT (Blu-Ray Review) 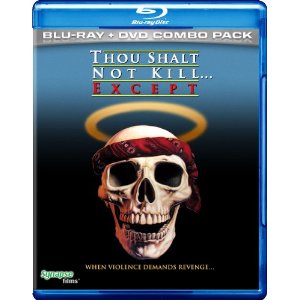 THOU SHALT NOT KILL… EXCEPT now on Blu-Ray from Synapse Films!

You know Doc, one of the greatest Westerns of all time is, without question, The Good The Bad and The Ugly.  Shot on a shoestring in the Spanish desert, Sergio Leone showed us a style of filmmaking not previously seen in the genre.  This was no John Wayne-in-Monument Valley picture.  The landscape,  new and exciting, might as well have been the surface of the moon.  Then television star Clint Eastwood delivered a gritty performance that would shoot him straight to legendary status as the iconic “Man With No Name”.  And then there’s that soundtrack.  Everyone knows Ennio Morricone’s famous score, which instantly conjures up imagery of a duel on a dusty road.  Perfection.  But as good as it is, I’m not here to review that film.  Look at the thumbnail… I just finished watching the brand new Blu-Ray release of another low budget film shot in a strange land.  Read on for the good, the bad and the ugly on Josh Becker’s Thou Shalt Not Kill… Except  (available now from Synapse Films).

Reversible cover art for THOU SHALT NOT KILL… EXCEPT

Aside from being a self-consciously slick introductory paragraph to this review, there are in fact a few similarities between the legendary spaghetti western and this cult classic. Story isn’t one of them (I’ll get to the comparisons in a minute).  It’s 1969 and Sergeant Jack Stryker (Brian Schultz) comes home from ‘Nam after getting himself shot up in a Viet Cong ambush.  As he tries to get his life back together, a Manson-esque cult (led by Evil Dead director Sam Raimi) kidnaps Stryker’s old flame (Cheryl Hausen) and kills her father.  “When violence demands revenge,” Jack gets his old marine pals back together to kick some hippie ass.  It’s pretty straightforward stuff: Marines vs. the Manson Family…  could you ask for a better idea for a revenge flick? 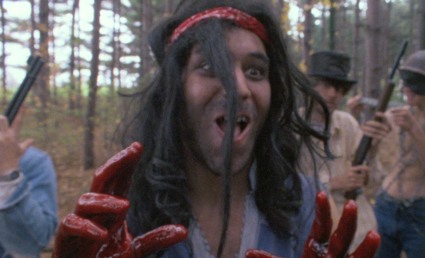 The Good:  With an estimated budget of $200,000 Becker and producer Scott Spiegel (Intruder, Hostel) get the most for their money.  Shooting in the woods of Michigan and calling in favors from friends, relatives and biker gangs, these guys (only in their early twenties) knew how to make a low-budget feature. Much like Leone, there’s a sense of style that comes from their restrictions.  Thou Shalt Not Kill… Except was made 15 years after the time it was set, but the film is able to achieve a real 60′s feel.  The cars and clothes are all of the era and being shot on 16mm provides a slightly fuzzy, vintage quality that would have been lost had the filmmakers been able to afford 35mm.  Tight on money, Sergio Leone knew that he could save a buck by shooting silently and filling in the soundtrack with a killer score.  While Joseph LoDuca’s music is nowhere near the brilliance of Morricone, it is pretty great by low-budget standards and adds a TON to the picture’s production value.  The gunfights and squib effects are terrific and Becker lucked out with some pretty decent stock footage to add to the illusion of war. 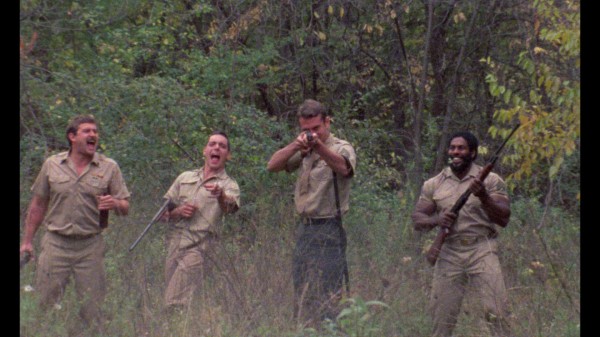 Sgt. Stryker (Brian Schultz) and company relaxing in Michigan. Or Vietnam. No, it’s Michigan. (I always confuse the two.)

The Bad:  The acting is pretty awful.  Not the worst ever, but the actors all seem a little out of their element.  Sam Raimi’s cult leader performance is half creepy and half (unintentionally) hysterical. He’s so over-the-top, he actually won an award for “worst performance by a director.”  I don’t consider this a strike against the film, mind you.  As bad as he is, he does ooze some sort of odd charisma that just makes him so much fun to watch.  Brian Schultz, on the other hand, is technically a better actor but he’s wooden and boring.  The short on which the film was based, “Stryker’s War” originally starred the legendary Bruce Campbell.  Due to Campbell’s recent joining of SAG, he was unable to star in the non-union T.S.N.K.E.  and it’s a damn shame.  The man is magnetic and amazing in anything he’s in.  To have seen him go up against Sam Raimi’s ridiculous Manson impression in a feature film could’ve been epic.  He was the Clint Eastwood this picture needed to be more than a just another cult movie.  It may never have been “Man With No Name” big, but it might’ve approached Evil Dead big.  The story is weak and the pacing is occasionally poor, but this is all buoyed by an abundance of violence.   While some of the effects are great, some are as sophomoric as holding a stick up to the actor’s stomach and letting karo syrup “blood” drizzle from his mouth.  Some of the fight scenes are also comically inept, making the film seem like a longer version of something the guys made after school one day (which, I suppose it is).  While Michigan is a great place to shoot a cheap movie, sufficing for about 90% of the film, it doesn’t work well at all doubling for Vietnam during the war scenes.  Just looking at the surrounding vegetation,  you can’t help but chuckle at how unconvincing it all is.  But isn’t that all part of the charm, Doc? 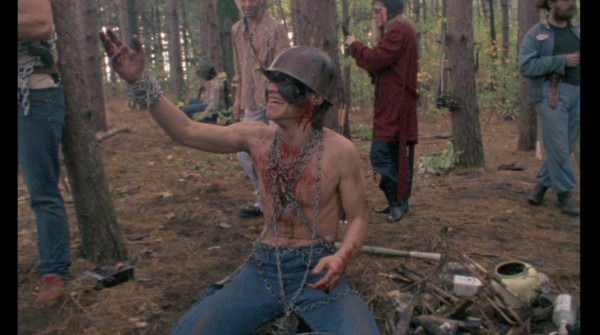 The Ugly:  There’s really nothing ugly about Thou Shalt Not Kill… Except. This Blu-Ray transfer (2K from the original negative) is perfectly clean and as beautiful as anything you’ll ever see 16mm. As amateur as the production is, the shots and lighting are very well done.  The colors are as rich as the day they were captured and again, the film stock works in the movie’s favor, adding to the experience of watching cheap exploitation cinema.  The soundtrack is the original 2.0 mono in DTS High-Def, which is fine by me.  It was a cheap production and they couldn’t afford a wild sound mix.  To re-master the film’s audio as some pseudo-5.1 surround deal for this release would’ve been pearls on a pig.  Synapse wisely embraces the low-budget charm giving us a terrific, gimmick-free lossless audio track; the best Josh Becker could afford at the time. 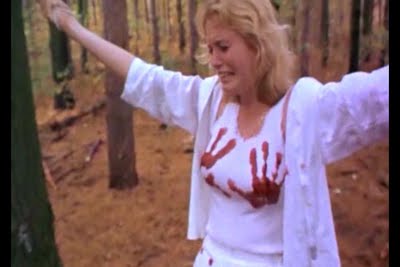 Sally (Cheryl Hausen) being a real handful on set.

We’re also treated to two commentaries, one good and one… not so good.  The good commentary features Becker and Campbell laughing at some of the more cheesy parts and contrasting others to the original 8mm short.  Listening to these two talk over the film was, in all honesty, more fun than watching the film itself. It’s great for anyone who wants to know how to beg, borrow and steal their way to making a feature and at times plays like an episode of MST3K.  The weaker commentary is star Brian Schultz with documentary and DVD producer Michael Felcher.  Schultz sounds like he’s eaten a large meal before sitting down to record.  He talks a good amount, but his energy is not unlike Droopy Dog from the old cartoons. With his stage acting background, I kind of got the feel he was embarrassed at one time that this was the role he’s most known for.  Well, Eli Wallach was also a stage actor and he took what he had to the role of Tuco and knocked it out of the park.  (I’m through with the The Good, The Bad and The Ugly references, now.) Although Felcher does a nice job driving the discussion, this commentary just lacks the appeal of the other. 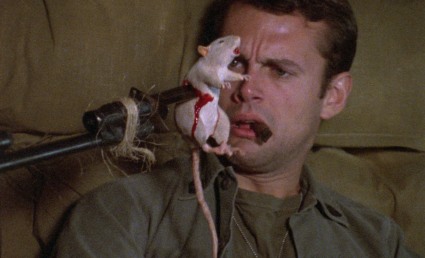 Synapse also includes some fair deleted scenes, an alternate title sequence from when the film was called Sgt. Stryker’s War, an All-New video interview with Bruce on his private back-lot, the original theatrical trailer and a very polished making of featurette.  Made In Michigan: The making of Thou Shalt Not Kill… Except is a half-hour Synapse produced set of interviews where the cast and crew (27 years later!) discuss their memories of making a movie from nothing.  It’s a great addition to the disc, but the crown jewel here is the full inclusion of the original 8mm Stryker’s War starring Bruce Campbell.  It’s not as pretty to look at, but Campbell’s evident star power and tighter pacing make for a very impressive 47 minute “short”.

Thou Shalt Not Kill…Except has a large cult following, but at the end of the day it’s not something I’d personally feel compelled to add to my collection.  I give it 2 out of 4 devils. The movie was impressive for what they were working with, but it dragged a bit too often for my tastes.  I guess that’s what cult movies are all about, though;  they have their niche audience, their rabid fans.  For those folks, Synapse has pulled this one out of moratorium and delivers quite a treat.  Yes, it’s good and it’s bad… but after sticking around for nearly 30 years, you certainly can’t call it ugly.  After all, beauty is in the eye of the beholder and plenty of eyes want to see this one, Doc.