NOT SUITABLE FOR CHILDREN (DVD Review) 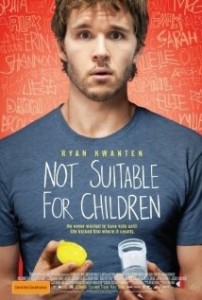 This past weekend was my baby nephew’s first birthday.  He lives quite a distance from me, so I’ve really only seen him three times in his 12 months of life and it’s pretty amazing how fast it goes.  When he was 4 months old, he just sort of sat there like a baby Jabba the Hut.  At 8 months, he could move his arms, albeit a bit clunky-like.  At 1 year, he can scoot around like a little race car on all fours, has a few teeth and can SCREAM like nobody’s business.  When he’s in a good mood, he’s an angel.  When he’s Mr. Grumps, I feel like scheduling a vasectomy, as I don’t think I could ever handle being a parent.  So it was fitting that I brought along “Not Suitable For Children” (available 4/16 from Well Go USA) to watch while I was there.  Because if a title describes you to a T, you’re bound to relate to the material.

And that can’t be half bad.  Right?

Thankfully, I can’t relate to this… and I don’t mean it in a bad way.   Jonah (Ryan Kwanten) is a 20-something who seems to avoid responsibility at all costs.  Along with his roommates Stevie (Sarah Snook) and Gus (Ryan Corr), their lives are hedonistic series of house parties and casual sex.  That is until one certain house party, where Jonah receives one certain BJ and discovers a cancerous lump on his testicle.

It turns out, his is a particularly rare predicament where infertility is all but certain.  Suddenly, Jonah finds his biological clock ticking in double time and he becomes obsessed with fathering a child.  With Stevie’s help and just a few weeks left before surgery, he hits up old flames, desperate single women (read: stalkers), lesbian couples in search of a sperm donor and other potential opportunities to spread his seed with disastrous results.  Because let’s face it: in order to raise a child, you really need to grow up first.  Can Jonah become a man before losing his balls? 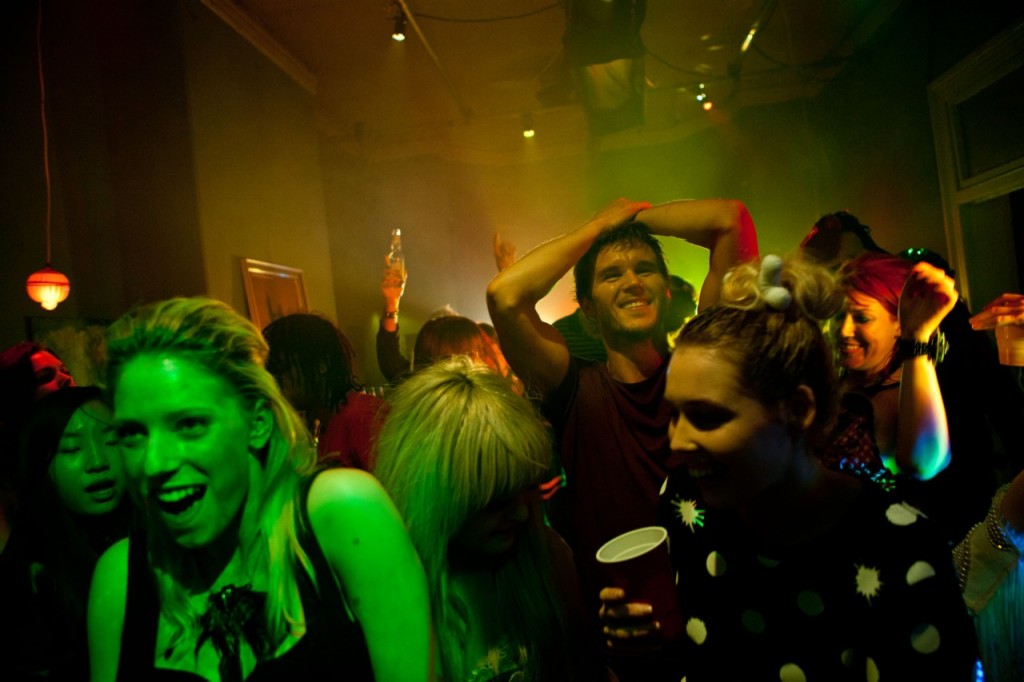 This Jonah guy (Ryan Kwanten) is certainly “Not Suitable For Children”.

The fun of “Not Suitable For Children” is the twist on Rom-Com conventions.     Usually it’s the woman racing to have a child before she’s 40 or looking to get married before she retires or whatever.  Here, you’ve got a guy who has no problem getting laid, but he’s not partner material.  No woman wants to be tied to him for anything. He’s your stereotypical hard partying loser and that’s what sets the character up for his more conventional arc; not until he balances his life can he achieve his goals.  While this sounds like a great opportunity for laughs, the film does take itself a little seriously making it more of a romantic-dramedy.  Director Peter Templeton is able to offer reasonable explanations for everything, keeping it realistic and grounded ; which isn’t necessarily the wrong choice for a film dealing with cancer, but it is the safe one.   This picture would’ve greatly benefitted from taking a bigger chance with the comedy a la “50/50″ which managed to perfectly straddle the line of serious drama and hilarity without making a farce of a serious situation.  It’s that kind of balance that takes a “good” film and makes it a “great” one.

If at first you don’t conceive, try, try again…

But nevertheless, the film never gets too dramatic to make it a bummer to watch.  It’s pretty enjoyable throughout and pushed along with a fantastic soundtrack that includes songs from “The Black Keys” and “The Gorillaz”.  Filmed down under with an all Aussie cast, “Not Suitable For Children” stars Ryan Kwanten, best known for playing Jason Stackhouse on HBO’s “True Blood” nails it as the lead’s lovable slacker.  He’s driven, but a bit of a putz  and you really feel him grow through film.  Truth be told, I’ve never seen one episode of “True Blood”, but I think this guy could have a great career in Hollywood films.  Just as good is Sarah Snook, playing his female roommate.  She’s like the Australian Emma Stone and I found myself crushing on her by the end of the picture. Rounding out the trifecta (though admittedly taking a backseat to the other two) is Ryan Corr who plays Gus as a fellow slacker, who’s both looking out for and non-intentionally working against his best friend as he’s scared to lose him to adulthood.  This is a role Jason Lee would’ve played and nailed ten years ago had this been a Hollywood picture. 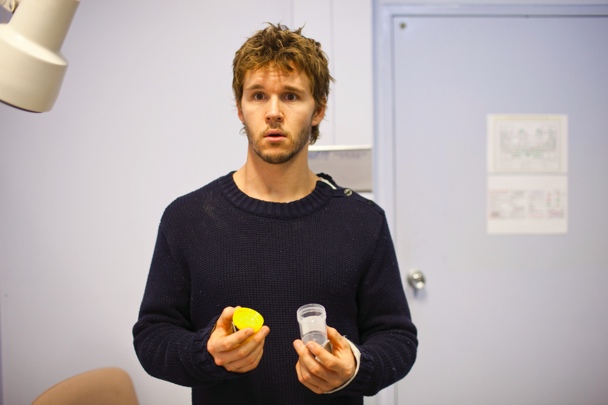 …and you can take that to the bank. The sperm bank!

The disc’s picture and sound quality are pretty great. The DVD looks just slightly softer than a blu-ray, but it’s clean.  Shot on digital with a budget of approximately $4,500,000 it truly amazes me how good a “cheap” movie can look nowadays.  The Dolby Digital 5.1 mix had me bobbing my head with that aforementioned stellar soundtrack, though this isn’t a movie that needs or really uses crazy surround sound.  The extras are somewhat plentiful, if not a bit dry.  There are cast and crew interviews which are nothing more than long drawn out talking head shots and a more traditional “Behind the Scenes” featurette.  In my opinion,  the “BHS” is more than enough info on the film and the individual interviews seem like self-indulgent filler.  Of course there’s also the film’s theatrical trailer, which I believe should be the standard for any good DVD release.

I feel like “Not Suitable For Children” is an ok movie, earning itself a 2.5 out of 4 angels.  It could’ve done more to fully live up to its new take on a cliche’d genre, but it’s good enough.  The script is good, the acting and directing are really good, but in the end it stayed too much in the middle of the road between comedy and drama.  The filmmakers would’ve knocked it out of the park going for bigger laughs and deeper emotions.  I mean, if you’re willing to give your left nut for something , you’ve got to realize it’s an all or none proposition.