Anyone familiar with weight lifting scenes in movies has no doubt heard the mantra “No pain, no gain!”  Some might argue this could be Michael Bay’s personal mission statement as he’s gained quite a bit for himself by inflicting pain on the intelligence of moviegoers everywhere for nearly two decades.  Personally, I don’t mind his films with their hyper-active visuals and no-brainer storylines, as they’ve set the standard for what has become the modern American popcorn movie.  This weekend, his latest Summer blockbuster, “Pain & Gain” opens… one week before the Summer movie season actually begins. Maybe Paramount wants to see men pumping iron before Iron Man pumps all the cash out of next week’s box office?

“Pain & Gain” is based on the twenty year old true story of Miami’s “Sun Gym Gang”.  When dumb-as-a-rock bodybuilder/wannabe entrepreneur  Daniel Lugo (Mark Wahlberg)trains asshole/multi-millionaire Victor Kershaw (Tony Shalloub), it changes his world forever.  Deciding that Kershaw doesn’t deserve the life he has, Lugo devises a plan with fellow meatheads Adrian Doorbal (Anthony Mackie) and Paul Doyle (Dwayne “The Rock” Johnson) to kidnap and force the man to sign his assets off to them.   After numerous bumbling attempts, the gang gets their guy and the torture begins.  Eventually, Kershaw breaks and gives them everything they want.  But there’s a small problem: he’s knows who they are.  After more cartoony blunders, Lugo and company kill their captive and leave him at the scene of a car wreck.  Or so they think.  As the Sun Gym Gang enjoys Victor’s wealth, he lives, laying low and planning to take back what is rightfully his. 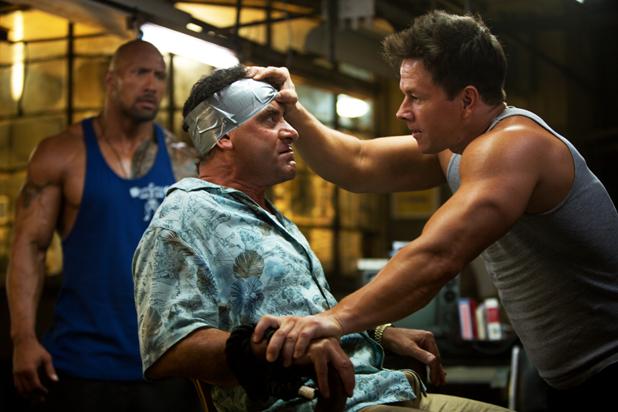 I absolutely adore the title:  “Pain & Gain”.  Usually associated with working hard through discomfort for physical reward, it’s obviously used here in reference to torturing a man for financial gain.  For a guy who’s willing to use steroids rather than push himself to achieve his bodybuilding  goals, it’s not shocking that Lugo looks for shortcuts in other aspects of his life.  He practically worships a Don Lapre-like huckster, attending get-rich-quick seminars while spouting the guy’s cheesy motivational catch phrases like a… well, like a personal trainer.  Having a prior arrest for defrauding investors in a sham company he created, Lugo claims to have learned his lesson and strives to be a “doer not a don’t-er”.  What he doesn’t understand is that while his schemes require effort in their execution, they aren’t exactly “putting in the work.”  He also doesn’t seem to grasp any of that morality stuff surrounding things like kidnapping, extortion and murder.  To the Sun Gym Gang,  this is just another business transaction and whether it’s steroids clouding their minds or they’re just too stupid to realize it, this is going to end badly. 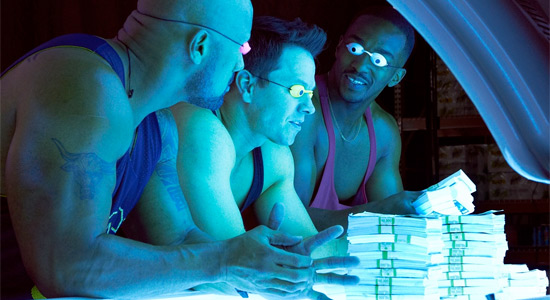 No pain, no gain they say…

The film has caught a bit of slack in the press from the survivors of the real events.  They feel (and rightfully so) that Christohper Markus and Stephen McFeely’s screenplay portrays the victims as borderline-criminal jerks, while the criminals come across as Robin Hood-like heroes.  While I can understand their frustrations, this seems like a necessary evil in making a film like “Pain & Gain”.  Part of the reason we’re along for the ride is because these goofballs are likeable.  Kershaw is such a jerk that we root for the plan to work – until murder comes into play.  It’s fun to be a part of the caper, but as soon as death enters the equation, you think “Woah. I didn’t sign on for this.”  We actually feel the plan spinning out of control and being able to cross that line with the lead characters makes the film that much more effective.  What caught me off guard is how humorous the movie is.  In real life, this was a heinous crime, perpetrated by cold, violent men. Yes, they tried to kidnap the mark half a dozen times before succeeding, but it couldn’t have been anything like the Looney Toons-style hijinx  Bay takes us through.  Again, it’s understandable that those who went through it would be mad, but this isn’t a true crime show on the History channel.  “Pain & Gain” is a star-studded blockbuster, that should be allowed to embellish a bit on a story that’s stranger than most .  Trust me, nobody’s going to sympathize with these characters by the time the credits roll. 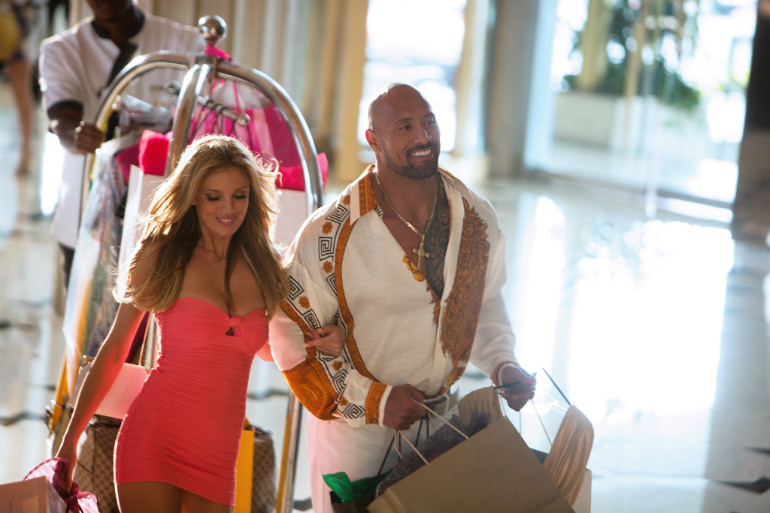 But Wahlberg, Johnson and Mackie do come off as likeable.  Individually they’re great, but when all three are together it’s like watching The Three Stooges on HGH. These guys are dumb, but they’re not played stupidly.  The actors keep these knuckleheads driven and serious about their goals, so even when they screw everything up, you see them working passionately to get themselves out of it.  Even at the most dire points you have to wonder, can they pull out of this one?

“Pain & Gain” gets 3 out of 4 angels.  It’s refreshing to see Michael Bay helm a movie that doesn’t rely on an overabundance of CG robots and the visually cluttered fistfights between them. While you could say this is a teeny tiny bit more character driven than his last few efforts, there’s still lots of comedy, action, violence and beautiful women to keep this in his summer movie wheelhouse.   But as entertaining as “Pain & Gain” is, it’s more of an appetizer than a main course.  I’m pretty sure it will get lost in the coming weeks beneath the weight of Superman, Captain Kirk, and Tony Stark.

You know, the guys who don’t need steroids to be tough.