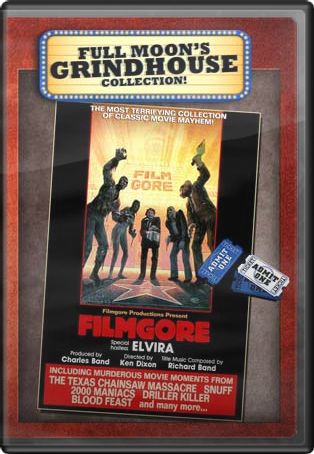 Here’s a little quote for you, Doc: “The child is in me still and sometimes not so still.”  – Fred Rogers.  That’s Mister Rogers, if you didn’t know him personally.  I may be a grown up, but I can still feel the twelve year old boy running around inside of me; though it could be that $5 Little Caesar’s pizza I had at lunch.  In any case, the 7th grade version of Malone was all giddy for the second film I’ve had the pleasure to review in Full Moon’s “Grindhouse Collection.”  This time around, it’s 1983′s Filmgore - a compilation of some of the finest horror clips Producer Charles Band (Trancers, Dolls) could afford.  With jokes written by the late Forrest J. Ackerman (Dead Alive, Evil Spawn) and featuring Elvira (Cassandra Peterson), this little flick is a wonderful nod to the VHS days of the ’80s.

The film starts off with a montage of clips from the very clips you’re about to see.  It’s not unlike ordering an appetizer sampler plate for dinner, then having the waitress bring out a smaller version of the same thing before your meal.  This montage even comes complete with its own title card!  Then comes the real opening credits, a fun little jaunt through creepy castle/dungeon hallways with dated video lettering.  At the end of it all, we find ourselves in Elvira’s lair where she sits on a demonic throne and introduces us to the first film: H.G. Lewis’ Blood Feast.  We’re treated to a roughly 20 minute version of the film, which is great for anyone with ADD or just a passing interest in this genre.  Next, we have a pared down version of Tobe Hooper’s masterpiece The Texas Chainsaw Massacre.  15 minutes after that, it’s Abel Ferrara’s The Driller Killer, then Drive-In Massacre and The Astro Zombies. Other notable films shown in abbreviated form are Carnival of Blood (with Burt Young) and another H.G. Lewis classic 2,000 Maniacs, though there are plenty more to enjoy. 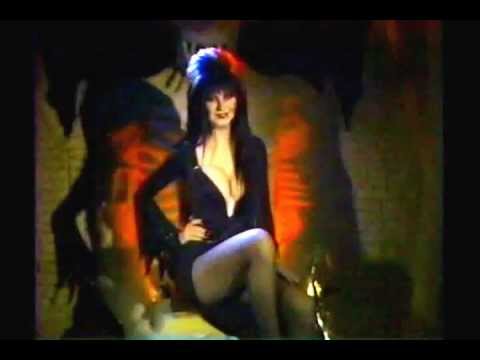 Unfortunately, there’s also an abundance of Elvira jutting in with awful one-liners.  Sometimes they relate to what’s on the screen (“Shocks… t’weren’t nothin’!” after an electrocution) and sometimes they’re completely out of place (“This picture is tomb much!”…for no reason at all.) Given the featured genre and randomness of its execution, I think it’s safe to say the filmmakers were banking off the stoned teenager crowd with this one – and they did it on the cheap! Most, if not all of these films were released by Band’s Wizard Video, so what better way to repackage and resell what they already had the rights to?

Such is the beauty of “grindhouse” cinema.  A piece of this film, a piece of that… cheap sex and gore, the occasional bad joke – it’s an art form that grew from both a lack of funds and a lack of pretension.  Nowadays, fans of a genre can splice together a bunch of clips on their PC (or iPhone, even) and post their compilation on the internet for all the world to see.  Kids with flip cameras can shoot, edit and distribute a no-budget picture in a single afternoon.  Sadly, it’s that kind of modern media saturation that both highlights Filmgore’s ingenuity, as well as diminishes its appeal.  This film could/would/should not have been made in the post YouTube world.  In the early ’80s, getting a tape like this was like finding a window into a different universe.  Like tuning in to discover a “lost” film on a local airwave at 2am, hosted by some low-rent Dracula. The “Mistress of the Dark” was still fresh and young and (depending on your age) there was a danger to watching gorey films hosted by a buxom lass. What if your parents found out!?  That danger, has now gone the way of the BetaMax.  The internet’s made sure of that.

She got caught red handed!

Like Auditions, the Filmgore DVD is pretty barebones.  Exactly like the other “Grindhouse” disc, there’s a brief, generic introduction by Charles Band, a “Grindhouse Featurette” which plays more like an ad for the collection as a whole and several trailers for Full Moon’s latest straight-to-DVD offerings (Evil Bong, Gingerdead Man and Puppet Master series’).  The film looks like it was pulled from VHS transfers and the sound is cheap and muffled during clips.  Everything with Elvira looks and sounds like it came straight from 1983 public access.  You know me, Doc – I consider this a plus as it just adds to the authenticity of the flick.  If you’re turned off by subpar A/V quality, nothing in the world will get you to appreciate this one.  Side note: Cassandra Peterson still looks like she did nearly thirty years ago.  Good genes or great makeup? Either way, God bless her!

I have to give this disc 2 out of 4 devils.  For the uninitiated, Filmgore is a pretty nice crash course in exploitation.  There were a couple of titles (Fiend, Snuff) that I’d never seen before and feel compelled to rent after getting a li’l taste.  It’s also a pretty nice disc just to have on in the background as you intoxicate yourself with a like-minded peer group.  However, if you’ve ever seen any of these movies (Texas Chainsaw, anyone?) you may find these rehashed clips to be a waste of time… or worse, grating thanks to the “Heartthrob of Horror’s” incessant interruptions.  Either way, I’m glad Full Moon released this little time capsule of the macabre.  Now you can revisit the video underground of your past, so long as you can peel yourself away from that damned YouTube.