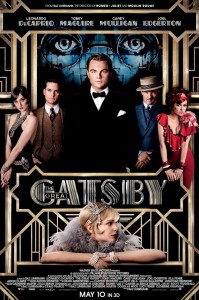 The worst thing in the world for a writer is “the start”; staring at that blank page and wondering how you’ll ever fill it all with words.  Never mind how you’ll fill it all with good words.  So imagine trying to adapt something like “The Great Gatsby”, one of the great American novels, for the big screen.  Sure it’s been done before (Francis Ford Coppola wrote the screenplay in 1974) with so-so results,  but how do you tackle something that big and make it good?  Well, Warner Bros. might have figured it out:  put Baz Luhrmann, the visionary behind the ultra-stylized, hyper-kinetic “Moulin Rouge!” in charge.

Surprisingly, this was one book that wasn’t part of my high school curriculum. If you’re like me and aren’t familiar with the story here’s a spoiler-free rundown:  Nick Carraway (Toby Maguire), a young Wall Street bond broker, rents a house for the summer on Long Island.  Next door to him is the palatial estate of the mysterious Jay Gatsby (Leonardo DiCaprio), who throws lavish parties on a weekly basis.  Only the who’s-who of 1920′s New York attends and the debauchery runs as rampant as anything seen in ancient Rome.  There’s booze, sex, gambling, music and dancing… and everyone from Government officials to bankers to actors partakes.  Yet with all of these interesting characters in attendance, none is as fascinating as Gatsby, who’s rumored to have been everything from a German spy to the man who fixed the 1919 World Series. The truth is, nobody really knows who he is or where his new wealth comes from.

But that’s about to change.

One day Nick receives a personal invite from Gatsby to attend one of these soirees and literally overnight, he is thrust into the social circle of New York’s elite.  As he drinks his way from one party to the next, Nick learns that his introduction to Jay Gatsby was no accident and the millionaire’s darkest secrets revolve around his very own cousin, Daisy (Carey Mulligan). Married into old money and residing just across the bay, hers is an extravagant  lifestyle in its own right, but the marriage is an unhappy one.  With Nick as the link between them, Gatsby’s obsession with Daisy’s past will soon change the futures of everyone involved.

Love him or hate him, Luhrmann is certainly a bold choice to helm a literary classic.  He seemed to do alright by that little “Romeo and Juliet” picture and his ingenious use of modern pop music for a musical set in the 1800′s brought a huge cult following to the vibrant “Moulin Rouge!”.  While there are a few moments like the latter in “The Great Gatsby”, the musical moments don’t take nearly as much precedence to the story and character development.   If you’re looking for a film that’s all about flappers dancing to Jay Z, you’ll be sorely disappointed.  Yes there are those moments of modern music set in an old style against a deco backdrop.  Three dimensional CG enhances and at times over exaggerates scenes to great effect, which seems to be Lurhmann’s calling card.  But at the end of the day, he remembers that this is about story.  While all the visual and audio flourishes provide an exciting mood for the movie, fantastic detail is paid to the direction of the actors.  Like a great novel must be, “Gatsby” the film is character driven. Even if a reimagined pop song plays, the focus remains on the dialogue as if Luhrmann took great care not to ever upstage, but to bolster Fitzgerald’s material.

For the most part, I couldn’t think of a better cast  for “The Great Gatsby”.  Fifteen years ago, Brad Pitt may have been a great choice for the titular part, but here and now, DiCaprio is the ideal choice.  He’s a fantastic, high-voltage talent who can play dashing, cocky, vulnerable and angry all at once; he’s a man of many faces.  Though I’m sure the experience of working with Luhrmann on “Romeo and Juliet” didn’t hurt things either.  Tobey Maguire is excellent as the somewhat naive vehicle that brings the audience into Gatsby’s world. I actually could imagine Joseph Gordon-Levitt knocking it out of the park in this role, but you can’t have Nolan’s players monopolize every movie, can you?   Maguire gives Nick Carraway an innocence and trustworthiness that serves as a rock to the audience.  No matter how crazy or deceptive things get, Nick is our constant.  While we see everything through his eyes, he’s far enough removed to be safe.  As is stated multiple times through the film, he’s within and without. 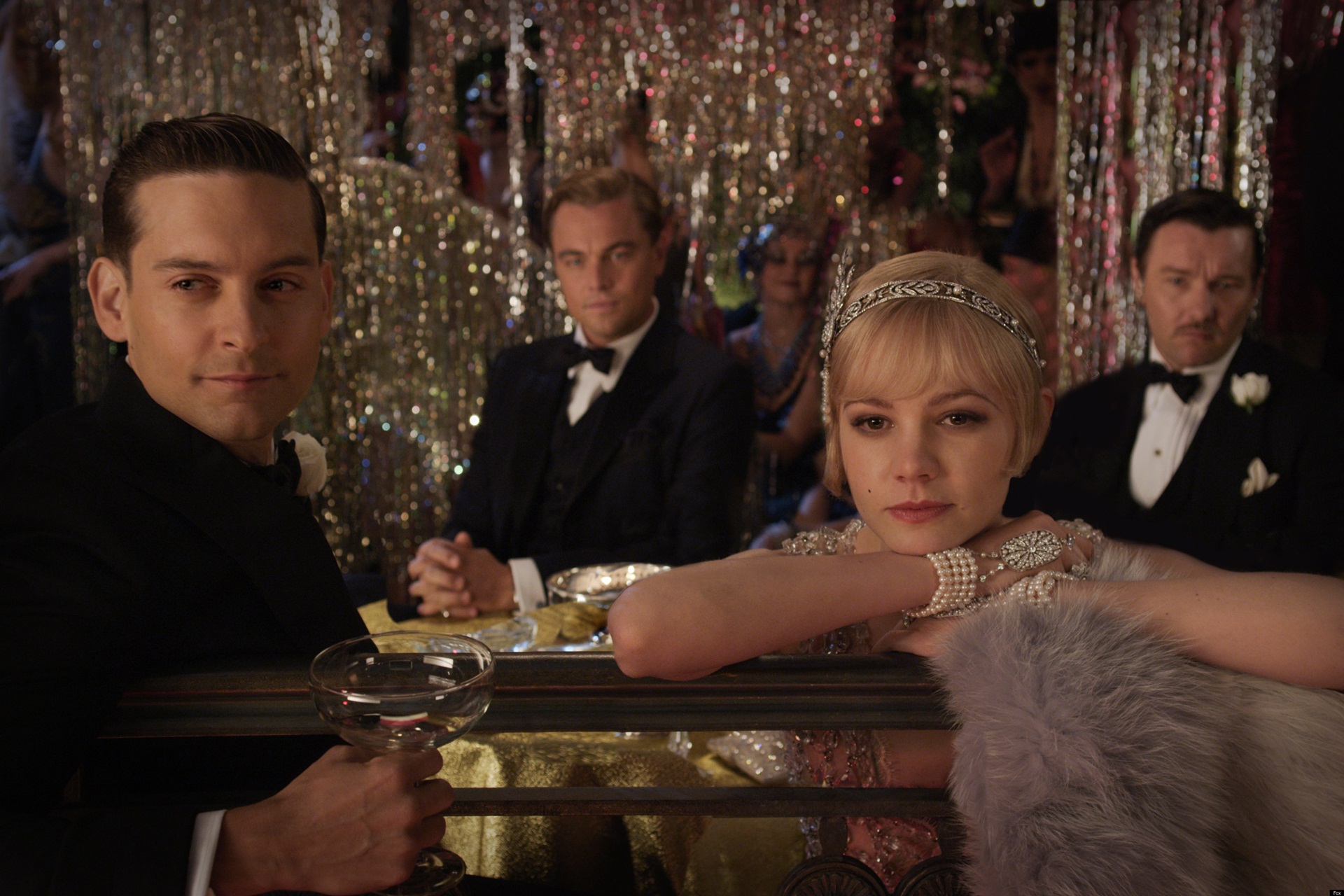 But I found Joel Edgerton’s Tom Buchanan to be perhaps the best performance of the film.  Edgerton just nails that “old boy” attitude and bravado.  Born into money, he’s well-educated, but occupies his days with sport and wild affairs.  He’s an alpha-male on every level and doesn’t hide the fact that he truly believes himself to be of superior breeding to the nouveau riche (and nearly everybody else). Always running around with a brow soaked in sweat, there’s a manic, dangerous quality to him.  Yes, he’s pampered, but he’s strong and ready to explode at any moment.

If there’s a weak link, I think it would be Carey Mulligan, who’s adequate performance was only that.  If Gatsby is a 100,000-watt light bulb, than he must be fascinated with a 150,000-watt Daisy.  Mulligan is cute and fun, but she isn’t electric.  Offhand, I can’t think of a better alternative using a name actor… maybe Keira Knightly?  It’s a tough one because Mulligan definitely has the acting chops, but is lacking the presence.

“The Great Gatsby” gets 3 out of 4 angels.  The film just pops with its fast pacing and stimulating visuals, but it slows down a little bit between the second and third acts.  Once the flash of the opulent 3D sets and energetic hip-hop music wears off, the movie falls into the category that I think most people place the book:  I’m really glad I saw it, but I don’t know that I’ll ever have to see it again.  In the end, “The Great Gatsby” is only “The Good Gatsby”.   As such, it’ll be more enjoyable in a great theater instead of on a good TV set.