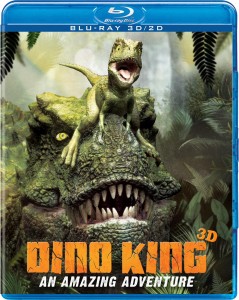 I remember when I was a child, any entertainment was good entertainment.  It didn’t matter if it was educational or not, I enjoyed it all the same.  Although, I’m sure my parents felt better about sitting me in front of the educational stuff, most of the time I didn’t even know what was going on; if a show was visually appealing or had someone that talked in a goofy voice, I was all in.  Nowadays, I see the same thing with my little nephew.  His parents sit him down in front of Baby Einstein to learn, but he’s just as enthralled by a ticking clock on the wall. I think the key really is to trap a kid with exciting visuals and cute characters and try to slip the smart stuff in beneath the radar.  That’s more or less what “Dino King 3D” does.  Coming to Blu-Ray and DVD 6/18 from Well Go USA, the film teaches about the giant lizards of the past as it tells an exciting tale.

Speckles is a Tarbosaurus, sort of an Asian T-Rex.  His mother, brother and twin sisters are master predators, calculating and precise in their attacks… but at only one year of age, he’s far too young to join them on hunts. One day, just as Speckles begins learning the family trade, One-Eye, a facially mutilated T-Rex who likes to kill indiscriminately, wipes out his entire family.  Now driven from his home and left to fend for himself, Speckles sets off through the dangerous forest hoping to survive hazards such as tar pits and hostile dino breeds.  He soon finds a partner in Blue Eyes, another lost Tarbosaurus, and the two eventually have a family of their own.  But out there, somewhere, One-Eye still lurks… and Speckles will have to continue to fight – not just to avenge his old family, but to protect his new one.

Speckles and his family

Released in Korea in 2012, but in development for nearly 3 years, “Dino King 3D” is a visual stunner.  Photorealistic CGI dinosaurs were added to backgrounds shot live in the untouched wilds of New Zealand to capture the look of the Cretaceous period.  Occasionally, the dinos move in a jerky fashion that looks computerized, but these moments are few and far between.  The 3D is top notch, further adding to the illusion of having a living breathing Tyrannosaurus Rex and Velociraptors right in your living room. 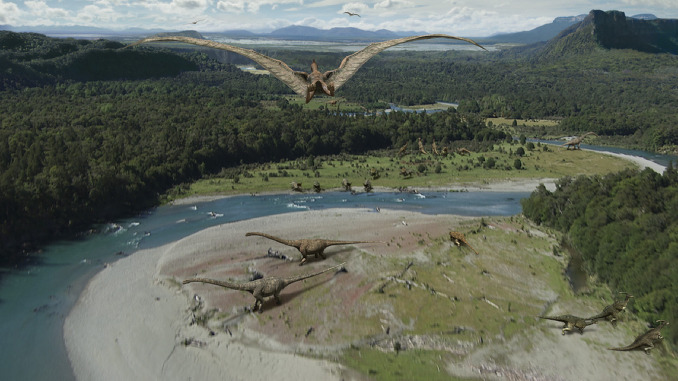 The entire film is narrated by Speckles, at first as a child, then later as an adult – there is no dialogue. Child Speckles gets pretty annoying, pretty fast as he’s voiced by an uncredited female like a giggly, cutesy Anime character.  Once he grows up, that annoyance disappears… but children aren’t going to care about any of that (and they’re definitely the ideal audience for this).  The script, written by director Han Sang-Ho and Lee Young-Kyu is loaded with dinosaur action that will have the kids watching this on repeat.  But Disney this isn’t, “Dino King 3D” doesn’t pull any punches and things do get a little violent.  After all, these are dinosaurs; they’re not going to lick each other to death.  Hunting was a means for survival and that’s exactly how it is presented here, though that’s not where the realism ends.  Actual facts are thrown in throughout, as Speckles describes his contemporaries, their behavior and the world they live in to the audience.  For example, he talks about why nobody messes with an Ankylosaurus (they have a bone crushing hammer for a tail) and that Torosauruses have horns that grow 3 feet long.  These little tidbits are mentioned seamlessly thrown into the narrative so you or your little ones will be learning even when you don’t realize it. 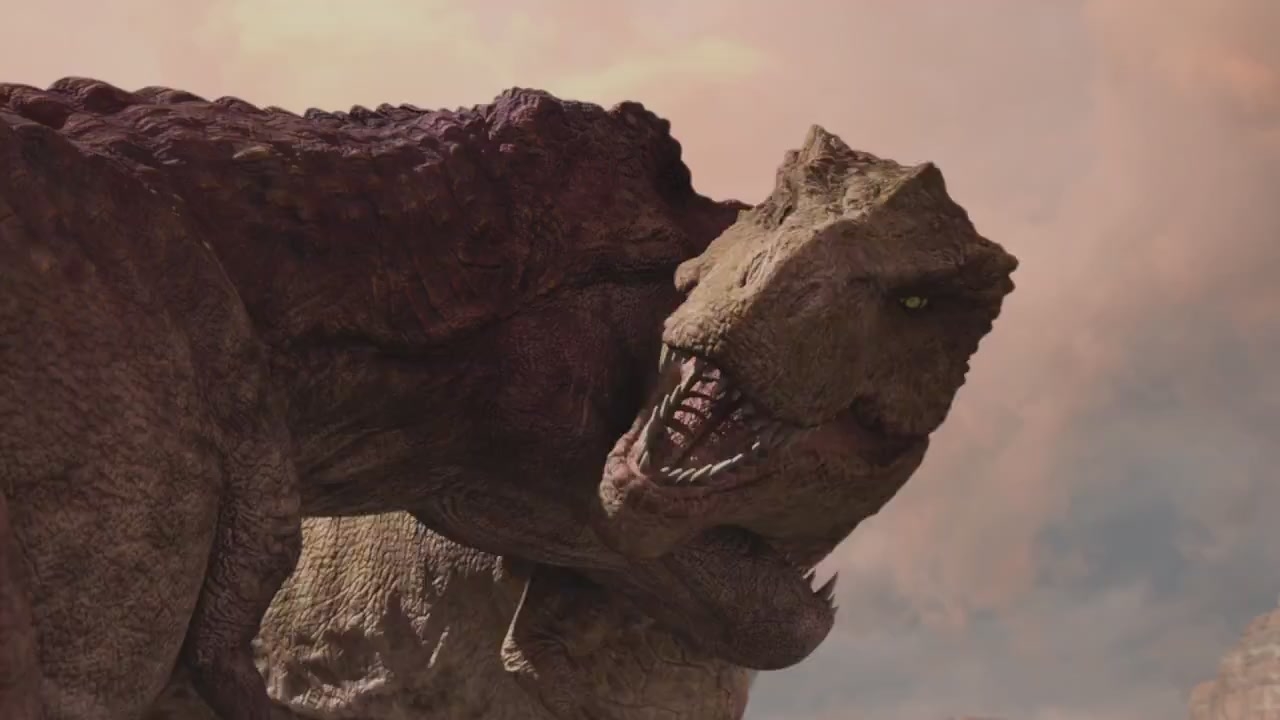 Some Tarbosaurus vs. T-Rex action!

“Dino King 3D” looks amazing on Blu. Incredible attention to textures lets you see every last scale on a Tarbosaurus toe.  The color palette is rich and beautiful and the use of real backgrounds (along with the occasional “Jurassic Park”-style practical effect) brings an impressive level of detail.  A 5.1 DTS HD-MA soundtrack provides fantastic surround effects, ideal for scenes with warring dinos – though the music sometimes sounds like it was pulled from “LOTR”.  Aside from the trailer there are no extras, but that could be a space saving measure due to Well Go USA’s decision to include both 2D/3D versions on the same disc.  It’s kind of a shame, because a behind the scenes look at how the visuals were attained would have been really cool.

“Dino King 3D” earns a 2.5 out of 4 angel rating.  With a mediocre story, the film is all audio/visual spectacle peppered with morsels of knowledge.  Sure it’s no “Jurassic Park” (now also in three fabulous dimensions), but you can tell that the team behind this film has a real passion for dinosaurs.  I mean, a Tarbosaurus fighting a T-Rex … in 3D?  You know that’s right up the alley of any 10 year-old… including the 10 year old in you.