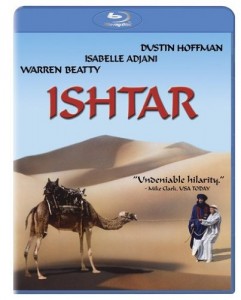 “, finally coming to Blu-Ray on 8/6 after years of delay from Sony Pictures Home Entertainment. Many people have ragged on the film over the years, including Gary Larson who mocked it in a “Far Side” panel, without ever having ACTUALLY seen the movie.  Well, now’s your chance to give the film a fair shake… and it’s never looked better.

” in a nutshell: Two horrendous lounge singers, Chuck (Dustin Hoffman) and Lyle (Warren Beatty) aren’t having much luck with their careers in New York.  When they’re finally offered a “major” gig, they jump at the opportunity.  Who cares if it’s in the war-torn middle eastern nation of Ishtar? Their arrival is thought to fulfill a prophecy and the two get mixed up in a conflict between leftist guerilla fighters and the CIA.  Pulled between the beautiful and mysterious Shirra (Isabelle Adjani) and an American agent attempting to prevent the overthrow of Ishtar’s government (Charles Grodin), the two must figure out a way to make it back to New York alive… and hopefully sell a few albums on the way. 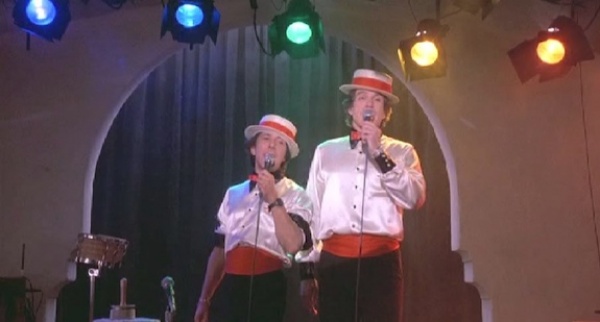 Chuck (Hoffman) and Lyle (Beatty)… legends in their own minds.

“, but on paper, it makes some sense.  Both have the highest comedic pedigree.  With it’s roots steeped deeply in the “Road to…” films of Bob Hope and Bing Crosby, Elaine May directing and Dustin “Tootsie

” Beatty starring, you’ve got some big guns aiming at your funny bone.  You just can’t argue the genius behind these line, delivered by the scatterbrained Lyle as he tries to talk his friend Chuck off a window ledge: “Hey, it takes a lot of nerve to have nothing at your age, dontcha understand that? Yeah, most guys would be ashamed…. but you’ve got the guts to just say ‘The hell with it!’  You say that you’d rather have nothing than settle for less.”  Of course this makes sense to Chuck who “never thought of it that way” and the day is saved.  May might have her characters act like buffoons, but they’re overflowing with heart, but it’s this delusional honesty from where many of the laughs come from. 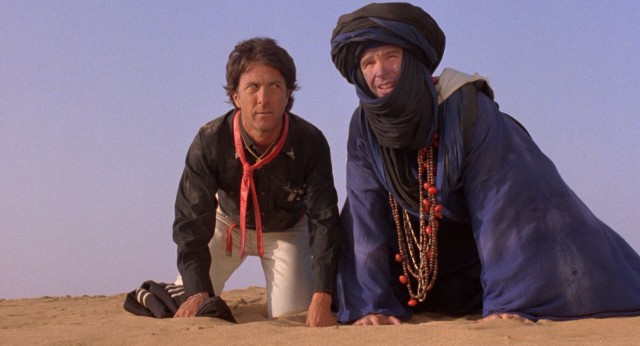 Full-length songs were commissioned to be the realistically awful tunes Chuck and Lyle create.  Painful as they are, they’re performed like these guys believe they’re the next Simon and Garfunkel.  Hoffman and Beatty bumble through numbers like “Dangerous Business” (“Because life is the way we audition for God/Let us pray that we all get the job.”) and “Wardrobe of Love” (She said come look there’s a wardrobe of love in my eyes/Take your time look around/and see if there’s something your size”).  They care so much that you’re rooting for them to make it, but at the same time their “talents” are so bad, you just want to clue them in.  It’s awkward and uncomfortable… and it’ll crack you up.

” relies a bit too much on this and does border on becoming a one-joke movie.  Things aren’t helped by some pretty bad pacing, particularly in the beginning of the film, that lingers a bit long on their career struggles in New York instead of jumping to the real story in the desert. This is bound to play even more poorly to younger viewers who are used to having everything cut by editors who are denied access to their ritalin prescriptions. Then there’s the minor peeve of mine of how Shirra is supposed to be confused for a boy, but so obviously a smoking hot girl.  It’s almost like they put in no effort to disguise her! That said, it would take a LOT to make Isabelle Adjani look masculine.  Jus’ say’n. 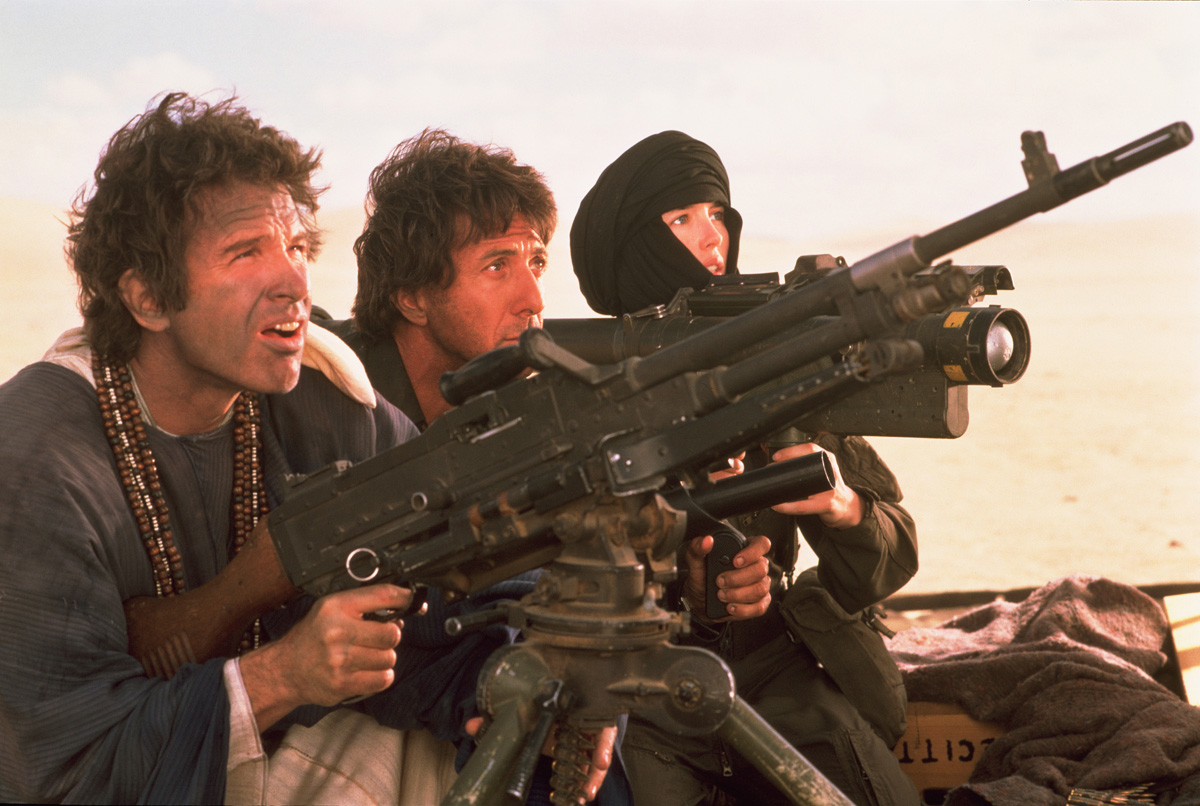 Who’s that strapping young lad in the back? Oh, it’s Isabelle Adjani!

And that goes doubly so on this beautiful Blu-Ray disc. Having only been released on VHS and laserdisc, “Ishtar

” never received the DVD treatment and as such, hasn’t looked this sharp since it was seen in theaters.  The film is clean with the right amount of film grain…. you’ll actually feel like you’re watching it on the big screen.  Once again Sony proves that nobody does Blu-Ray better than the format’s creator.  But that’s just with picture.  The DTS-HD MA 5.1 soundtrack is decent, but not great.  It’s basically just glorified stereo, with only the occasional sound effect or music really utilizing the rear channels.  The dialogue comes crisply through the center channel, while most of the other sound is matrixed.  There is also an unfortunate lack of extras on this disc… and by lack, I mean there actually aren’t any.  There are Sony’s obligatory trailer/ads for upcoming releases, but nothing at all relating to “Ishtar

“.  It’s a shame given the film’s troubled production history and growing cult following in spite of being labeled the quintessential dud.  Interviews, featurettes, theatrical trailer, standard issue Leonard Maltin introduction… they’re all noticeably absent from a film that’s arguably more important to pop culture than the latest reboot/relaunch/rehash getting the special edition 3 disc treatment.  Maybe we’ll get a bone thrown our way for a 30th anniversary release in 2017.

In any case, beggars can’t be choosers, so at least we’re getting the Blu-Ray.  ”Ishtar

“, but it’s certainly better than the bum rap it’s gotten through the years.  I think Chuck and Lyle say it best in their song “Hello Ishtar”: “Hello Ishtar – you’re more than a country/You’re a state of mind!”

Whatever it is they’re trying to say.