AT ANY PRICE (DVD Review) 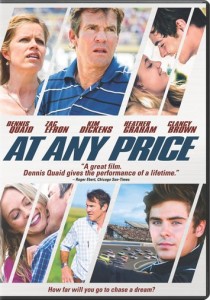 AT ANY PRICE, coming to DVD and Blu-Ray on 8/27 from Sony Pictures Home Entertainment

There’s an old adage in the screenwriting business: “Show, don’t tell.” On that front, director Ramin Bahrani’s “At Any Price

“ opens beautifully. Home movies capture the backyard barbeques and birthdays of the Whipple family, who live and work in the cornfields of Iowa. We end up seeing 20 years of exposition in a little more than two minutes. It’s a smart, effective way of handling backstory. Unfortunately, it’s about the only thing the movie does well.

An official selection of the Venice International and Tribeca Film Festivals, At Any Price is, at its heart, a story about fathers and sons. Dennis Quaid plays Henry Whipple, a third-generation farmer and seed salesman, hoping to pass the business onto his son, Dean (Zac Efron). Despite his father’s wishes, Dean chooses his stock car over the family farm, and eventually catches the attention of NASCAR recruiters. But when Henry’s empire becomes the center of a criminal investigation, it sets off a chain of events that puts the dreams of both men in jeopardy. 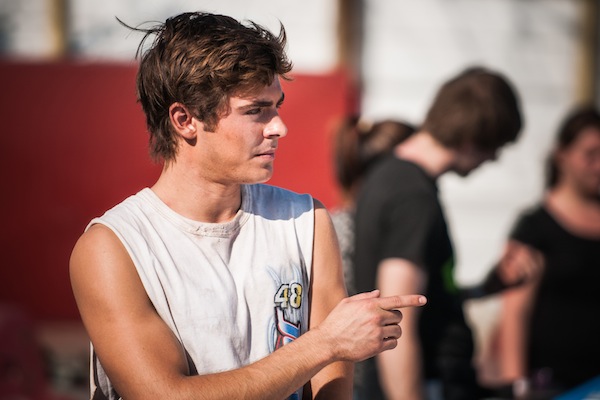 Dean Whipple (Zac Efron) has the need… the need for SPEED!

Chief among the film’s problems is a lack of subtext. This is the type of movie where nothing is left to the imagination, where characters bare their souls to relative strangers and even the slightest ambiguity is hammered into submission. That’s not to say that clarity isn’t appreciated, but when a film insults the intelligence of its audience, it becomes an alienating experience. This approach sabotages any chance of creating a compelling story. To compensate, At Any Price relies on melodrama to power it through, and the results aren’t pretty.

Dennis Quaid does his best, but even his talent can’t salvage the material. His performance, like the script, wrings every last ounce of subtlety from the film. It’s disappointing that Quaid doesn’t embody Henry so much as he embellishes him. Odd choices, like the manic smile when Henry slips into Yoda-speak (“Oh, worry not, for approval I shall get!”), are at odds with the shrewd businessman we see earlier in the film. Quaid eventually settles down in the role, replacing his affectations with emotion, but it’s too little too late. It may be tempting to blame the script for the Quaid’s shortcomings, but his work smacks of a actor in love with his own creation – and a director too timid to rein it in. 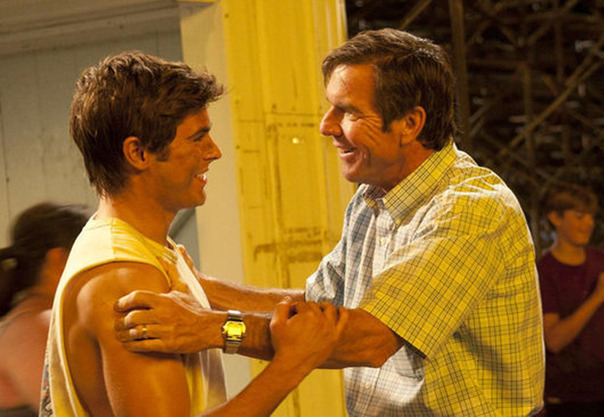 Henry Whipple (Dennis Quaid) may not see eye to eye with his son, but blood is thicker than motor oil.

Zac Efron, by comparison, barely registers on the screen. Still struggling to establish himself in the wake of High School Musical, Efron’s good looks undermine his efforts. The young actor can’t quite pull off the edge that a character like Dean demands. The role calls for something more gritty than glamorous. But his performance is adequate, even tolerable, for the first hour of the film. Things go downhill when, like Ricky Bobby, Dean sees “the fear” during a race. Rather than being a natural extension of his character, Dean’s choices from there become increasingly obligated to serve the melodrama. Efron’s inability to cultivate a sense of danger undercuts the film, and almost derails the entire picture in the process.

With all the focus on fathers and sons, the women in the film are given short shrift. Kim Dickens stars as Irene, Henry’s long-suffering wife. It’s a thankless task for such a talented actress. Her character is exasperatingly passive, accepting her husband indiscretions with a minimum of fuss. The source of that indiscretion is Meredith (Heather Graham). As the town hussy, Graham isn’t asked to do anything more than look good, and ends up being entirely superfluous to the plot. The lone bright spot is young Maika Monroe as Cadence, who manages to show some pluck as Dean’s girlfriend and Henry’s intern.

Thankfully, Bahrani’s direction in stronger than his writing. His use of space when shooting on location is impressive, as he’s able to avoid clutter and fill the frame with detail. He’s also surprisingly adept at action. Dean’s races are put together nicely, and are among the only scenes that genuinely captivate. To be fair, At Any Price is not a poorly directed film; it’s just a badly written one. 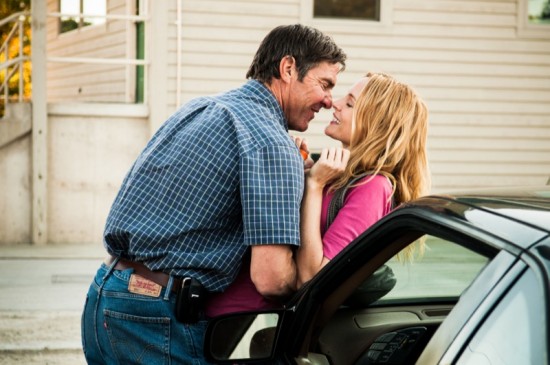 Quaid and Graham have better uses for an automobile…

The transfer on the disc looks sharp. Despite the abundance of natural light here, the image never appears washed out, and the range of colors compliment the cinematography. 5.1 Dolby Digital Audio in English with French subtitles. Special Features include a commentary track with Ramin Bahrani and Dennis Quaid, a Q&A at the Toronto Film Festival, Rehearsal Footage (featuring the crew as talent) and the Theatrical Trailer.

Both director and star have acknowledged the influence of Arthur Miller’s “Death of a Salesman“ on their work. The inspiration shows in the similarities between Willy Loman and Henry Whipple… and in the fact that they’re better plays than movies. The performances and dialogue in Bahrani’s film seem better suited for the stage, where the threshold is higher for emoting. On film, it comes across as caricature, and ruins the aesthetic of the film’s rustic, Midwestern locale. Though its pedigree as a festival darling might convince you otherwise, “At Any Price

“ simply isn’t worth the cost.