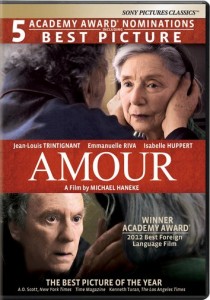 Chances are, if you saunter into the local multiplex on any given weekend, you’ll find a schmaltzy romance engineered to raise the expectations of women everywhere.  Films where young, good-looking couples overcome the odds to find their “happily ever after”.  Of course, every now and then, a filmmaker might throw a wrinkle into the formula to keep things fresh.  But sometimes, if you’re a director like Michael Haneke, you obliterate the formula, fast-forward 50 years and take a hard, unflinching look at that couple’s unhappy ending.  You might even christen the film something ironically generic, like Amour

Winner of both the Palme d’Or and the Academy Award for Best Foreign Language Film, Amour

tells the story of Georges (Jean Trintignant) and Anne (Emmanuelle Riva), a married couple living out their golden years in the heart of Paris.  Their relationship has settled into something pleasantly average; punctuated by the extra glass of wine and the occasional trip to the concert hall.  Things take a turn for the worse when Anne suffers a devastating stroke, testing both the strength of their marriage and the limits of their devotion. 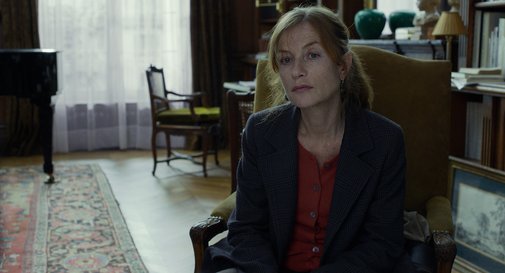 has amassed such critical acclaim is due in no small part to Emmanuelle Riva’s performance. Her transformation from a well-meaning, if slightly bored, housewife to a physical and emotional paralytic is at turns powerful and harrowing.  The Academy rightly recognized Riva with a nomination for Best Actress, but her work here makes winner Jennifer Lawrence (talented as she is) look positively juvenile.  Even at her most desperate, Riva’s performance never veers into hysterics or self-consciousness.  Throughout the film, Anne remains a real person, complete with the anger, resentment and hope that accompanies her affliction.  Her delivery, often through hushed tones and labored breathing, can move even the most jaded of filmgoers.  If there’s any reason at all to see this film, it is for Riva’s beautifully realized performance.

That’s not to say that Riva is the only powerhouse on display.  Jean-Louis Trintignant, in a role written specifically for him, imbues Georges with a stoic intensity.  Trintignant arguably has the more difficult task, making Georges’ devotion to Anne something more than one note.  The veteran is up to the task, however, and frustration crackles beneath his steely exterior.   But there are also moments where he gets a chance to showcase his range. Particularly moving is a bedside scene between the leads, where Anne reminisces about the young, “uptight” Georges.  While Riva’s words carry the load, Trintignant’s choices, like placing his hand over Riva’s, provide the emotional push that make the scene sublimely bittersweet.  Though his work may not leap off the screen quite like Riva’s, Trintignant holds his own and then some. 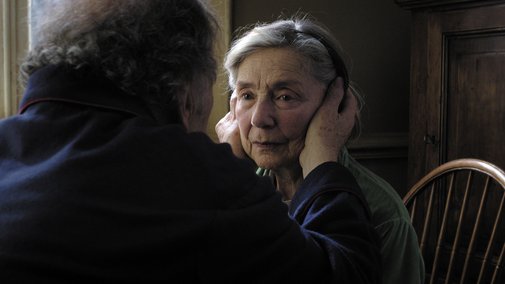 To his credit, Haneke makes the most of a single location, placing his actors in an exact reconstruction of his parents’ Parisian apartment.  While the production design is certainly impressive, this is not a traditionally “pretty” film.  Its muted color palette and deliberate pace could test the patience of some viewers.  There are, however, some instances where Haneke manages to put his stamp on the material.  His use of intricate tracking shots and surrealistic touches help break up the monotony of the surroundings.

The transfer for the DVD version of Amour

looks good.  There isn’t much deep focus photography here so perhaps the only thing you’ll be missing are the finer details on the elaborate set design.  Standard two-channel French audio with English subtitles on the disc.  For some reason there’s a slight pixelation on the subtitles (nothing major, but definitely noticeable).  I have a preference for yellow subtitles for ease of reading but they’ve chosen to go with white here.  Special Features include a 25 minute making-of featurette titled, Scenes d’Amour, a Q&A with director Michael Haneke and the theatrical trailer. 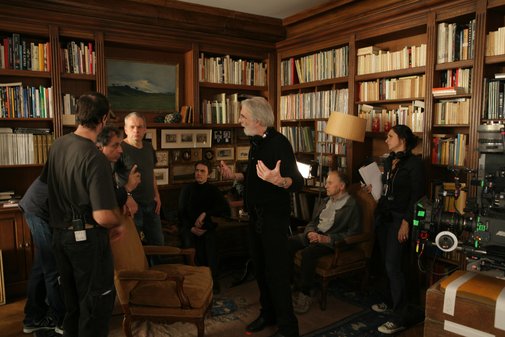 By no means an “easy” film, Amour

certainly ranks among Haneke’s more accessible works.  Thematically, the auteur is still in his wheelhouse, erasing any distinction between the pure and perverse.  In his own singular way, Haneke explores loyalty, love and loss with mixed results.  Sure, you can see where the film is headed well before its over, but this isn’t a narrative that depends on a culmination.  To put it in layman’s terms: It’s about the journey, not the destination.  With that in mind, you may find more to admire than to love in Amour