ROCK OF AGES Will Rock You Like A Hurricane (Film Review) 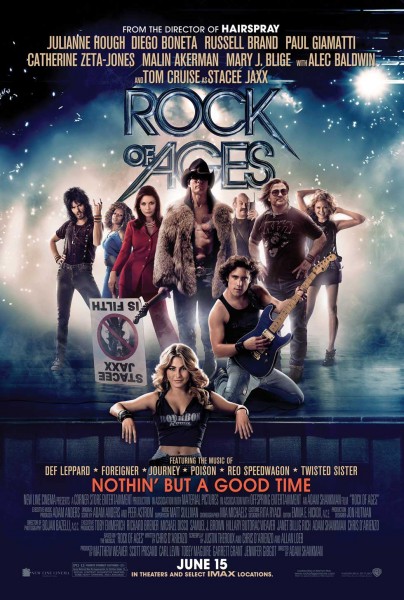 ROCK OF AGES in theaters now!

Looking back at decades past, we often feel a blend of nostalgia and embarrassment.  Usually music brings the nostalgia, fashion brings the embarrassment.  Sometimes it’s the reverse: some clothing styles make a comeback and sometimes you just can’t believe you wore out that NKOTB cassette.  On June 15th, Warner Bros.  releases the film version of the Broadway hit Rock of Ages.  Starring Latin American sensation Diego Boneta, Julianne Hough, Alec Baldwin, Catherine Zeta-Jones, Russell Brand… and of course Tom Cruise, the cast members perform their own musical numbers.  This is certainly going to draw fire from music snobs and folks who just woke up from 30 year comas – but those who can sit back and enjoy it are in for “nothin’ but a good time.”

The year is 1987.  Sherrie Christian (Julianne Hough) leaves small-town Oklahoma for big, bad Los Angeles in search of a singing career.  She arrives, immediately falling on hard times and finds a friend in Drew Boley (Diego Boneta) who helps her find work at the Bourbon Room, a thinly veiled Whisky-A-Go-Go.  The Bourbon, struggling to keep its doors open, is in dire need of a cash infusion brought in from the final performance of popular rock band “Arsenal” as fronted by mega-star Stacee Jaxx (Tom Cruise).  Unfortunately, Jaxx is as unreliable as he is famous and that combined with his ultra-sleazy manager Paul Gill (Paul Giamatti) leaves the club’s owner Dennis Dupree (Alec Baldwin) wondering if The Bourbon will live to rock another day.  As the Stacee Jaxx frenzy takes over, Sherrie and Drew develop a romance that is put to the test by rock ‘n roll and all of its trappings. 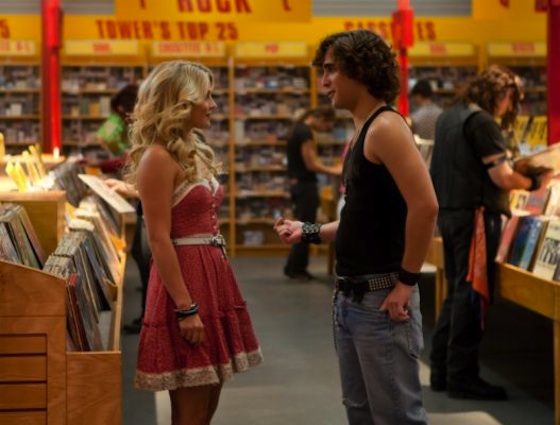 Rock of Ages never pretends to be anything it’s not.  The opening scene shows Sherrie boarding a bus heading for LA.  Sad to leave her world behind and unsure of her future, she begins to sing “Sister Christian”… a song that’s corny to begin with.  It’s actually groan-worthy until the bus driver joins in with a voice not unlike Bowser from Sha-Na-Na.  Then another passenger, eavesdropping, chimes in with a verse or two and it becomes apparent that director Adam Shankman is taking the audience on one surreal and over the top ride… and he’s got the radio turned way up.  If the film loses you before she gets off the bus, you might as well get a refund because the campiness endures throughout the entire feature.  Songs are often used quite literally (Sherrie Christian = Sister Christian) and like most every musical ever produced, characters will just bust out singing.  But that’s part of the fun, after all.  In the middle of a scene, you’ll hear the first few notes of a song and (I think I’m showing my age, here) based on the context of what’s going on be able to guess what they’re about to sing.  It’s a 20th century pop-rock opera… as if Hairspray (minus the social message) had a child with Moulin Rouge and chances are you’ll find yourself singing along. 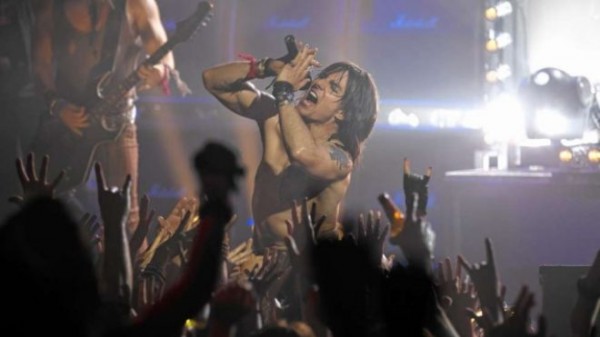 The film never takes itself seriously and I found myself laughing with it the whole time.  This is largely due to the incredible cast that’s been assembled.  I normally don’t like Russell Brand AT ALL, but he and Alec Baldwin play off of one another so well I could actually stomach the bloke.  As a matter of fact their duet of REO Speedwagon’s “I Can’t Fight This Feeling” is actually a highlight and drew plenty of laughs from the crowd.  But the real shining star of the film is Tom Cruise.  Stacee Jaxx isn’t a rock star, he’s a rock GOD, having more fame than he knows what to do with.  Cruise provides more than enough star power to make the character’s charisma credible, but he’s not merely playing “Tom Cruise”.  Jaxx is more complex than just a “famous guy”.  He’s a bad boy, charming and dangerous, lazy and rude, endearing and earnest. You can’t help but like him, though you know you probably shouldn’t.  I’d say the performance is up there with his Les Grossman character from Tropic Thunder AND he can actually sing well! 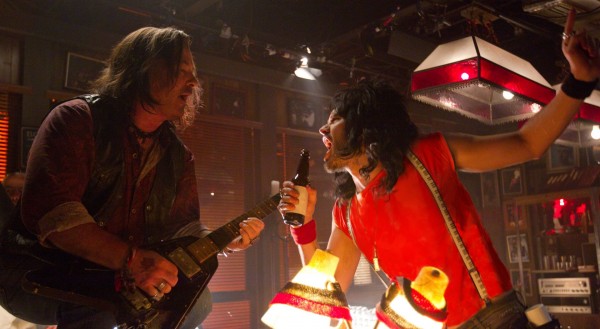 Or sing well enough, anyway.  Many of the actors in Rock of Ages are able to just carry the tune, but the last time I listened to Bob Dylan… eh, cheap shot.  The point is, rockers don’t need to be able to sing opera and that’s kind of what makes rock so accessible.  Anyone can pick up a guitar and make a song with three chords and the desire to score chicks. The actors are able to bring us likable characters through songs like Paradise City and Pour Some Sugar On Me.  What more could you ask for?

Sister Christian, oh the time has come… for a new hairdo.

Clothes, of course!  Costume designer Rita Ryack does an amazing job with poking fun at the fashion faux pas of the 80′s and early 90′s without going too crazy.  In a film where overboard seems to be the thing, Ryack is wise enough to tone it down enough as to not turn the characters into caricatures.  When Bonnie and Clyde was produced, Theadora Van Runkle sketched out Bonnie’s wardrobe complete with hairstyle’s reminiscent of the 1930′s.  Producer Warren Beatty made the decision to give star Faye Dunaway a more contemporary 1960′s ‘Do as audiences would be more likely to identify with her.  He was right. People went crazy for Bonnie’s look and nobody questioned the authenticity of the film’s style.  In Rock of Ages, clothing is palatable to a modern audience with an 80′s touch.  You won’t find an abundance of people running around in Members Only or Michael Jackson jackets and the only times the wardrobe goes to an extreme is when the story actually calls for it.  In turn, you’re never pulled out of the movie because everyone’s dressed like an A-hole.

This is a film I really recommend watching in a theater with an audience. As long as nobody breaks out a cell phone, the communal experience as well as a top notch sound system really adds to the enjoyment of it all.  Honestly, Rock of Ages isn’t going to win an Oscar for Best Screenplay or Best Picture, but it is a lot of fun.  While the story isn’t the strongest, you will laugh and you will sing and you just may catch yourself wishing you could go back in time to become a rock star.  \m/