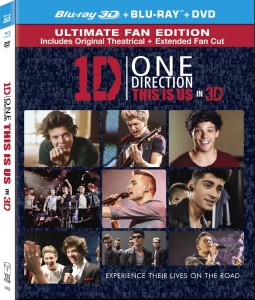 Sometimes, searching for “bad” movies turns up a few surprises.  Case in point, I recently came across this press release for “One Direction: This Is Us”, coming to 3D Blu, Blu-Ray and DVD on Dec. 17.   I haven’t heard much of their music, but I know they’re HUGE with teenage girls. Naturally, my first thought is that these guys are the Superman 2 to Justin Bieber: where he is just one, they are five – bursting out of their British phantom zone to reek havoc on US pop culture.  Then I saw this documentary was directed by one of my favorites… Morgan “Super Size Me” Spurlock. Mind = blown.  Did he sell out or is this thing actually pretty good?  Feel free to comment if you’ve seen it, as I’m actually kind of interested in hearing some reactions.  Click “READ MORE” below for specs on the various editions being released.

Here’s the trailer below.  It could be interesting if Spurlock gives an honest look at what it’s like to become famous virtually overnight, but could go the other way if it’s aimed solely at screaming teenage girls…