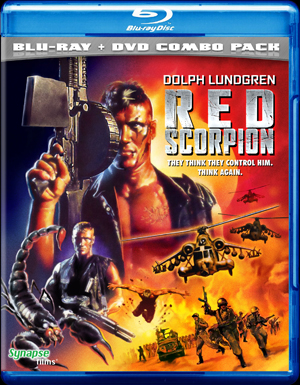 I never liked math as a kid (or as an adult for that matter), but here’s a little equation I threw together:  Dances With Wolves – wolves and Natives + Soviets and Africans – any dancing whatsoever + Little Richard music seemingly on repeat x Dolph Lundgren = 42.  Hold on Doc, I messed that up. Carry the one… well, whatever… the answer is Red Scorpion.  Now on dazzling Blu-Ray from Synapse Films, Lundgren’s follow up to that boxing picture comes home guns a-blazing and reeking of Cold War nostalgia.  So get off your Pogo Ball and put away those Garbage Pail Kids… it’s time to kick some Commie sack!

Dolph plays Lt. Nikolai Rachenko, Soviet Special Forces – basically a one-man Army.  His mission is simple, infiltrate an anti-communist group in Africa and kill their leader.  When he fails to do so, he’s told he’s no longer Spetsnaz and tortured.  Being Dolph Lundgren, he kicks some ass and busts out of his confines with the greatest of ease.  Rachenko then befriends an African bushman (seriously) who helps him to realize he’s been fighting for the wrong side.  Joining the rebels, he now fights the military force he once was willing to give his life for.

The story of making Red Scorpion is much more involved than that of the film.  Produced by convicted lobbyist Jack Abramoff, the film was a platform to spread Anti-Communist sentiment in the mid to late ’80s.  The production company had a deal in place with Warner Bros. to distribute as long as the film met WB standards on completion.  During shooting, the small kingdom of Swaziland kicked the crew out, scared it was secretly some sort of coup.   After many weeks of searching for a new location (and running up an additional $500,000 to their $8 million budget), they were finally allowed to shoot in Namibia.  Due to an international boycott on South Africa (still segregated under Apartheid), Warner Bros. pulled out of the distribution deal.  In the end, having spent double their budget and without a clear distributor, the bond company took control to quickly finish off the picture.  Shapiro-Glickenhaus Entertainment eventually picked it up and distributed the Scopion all over the world.  The film would tank in theaters, but later thrive in the home video market.  Oddly enough, this would be the way most Lundgren pictures would make their money over the next twenty years.

For such a troubled production there sure was a lot of name talent involved.  M. Emmett Walsh plays an annoying American journalist who likes bacon cheeseburgers, rock ‘n roll and dead Communists.  Brion James and T.P. McKenna play Soviet military men, while F/X great Tom Savini works his magic (particularly during the cringe-worthy torture scene).  The script is solid, holding up decades after the fall of the iron curtain.  The only thing that really stands out like a sore thumb is the use of 50′s rock ‘n roll during major action scenes.  Like that would somehow make the whole thing even more ‘merican.  In these scenes, director Joseph Zito tries to bring a carefree lightness that simply has no business in car chasing, bullet dodging, explosive ass kicking.  Despite all this, it’s not hard to see that the film rides on the shoulders of Lundgren who’s charisma is as large as his pecs.  He can send chills down your spine with a single scowl and make you cheer giddily when he answers the question “Are you out of your mind?” with “No, just out of bullets.”  Then he burps.

This 2k transfer is the best this film has ever looked.  Certain scenes are grainer than usual, but  nothing too bad.  The picture’s been cleaned up pretty well and the film looks like it could’ve been shot 5 years ago, rather than 25.  The audio is in both 5.1 DTS-HD Master Audio, providing a clean mix that makes good use of surround sound and the original 2.0 mix, also in DTS-HD Master Audio.  Both are great, but the 2.0 has that true “downtown cinema” feel.  Others may appreciate the open feeling of the 5.1 track which gives the film a modern and more spacious feel.  You really can’t go wrong with either. 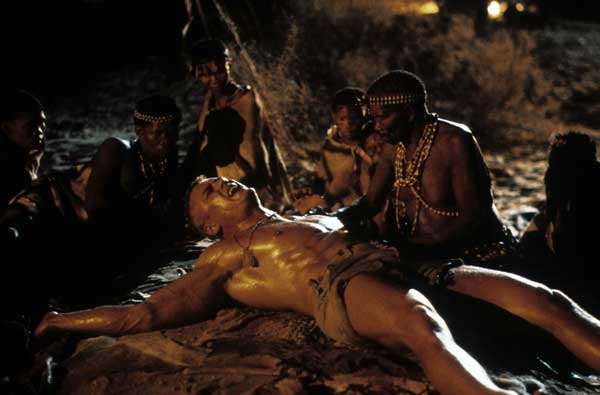 Bonus features are found in abundance, but I found the shining star to be the featurette Scorpion Tales, a super cool interview with Tom Savini which shows how he did some of the amazing makeup effects for the film.  Savini also provides some Behind the Scenes VHS video footage – a nice little addition.  Hath No Fury is a sit down with Dolph Lundgren where he discusses his early career, from bodyguard to Grace Jones, to James Bond background actor, to playing Ivan Drago and ultimately headlining his own movies.  Everyone knows Dolph is extremely intelligent (he holds a masters degree in Chemical Engineering), but this interview also shows how humble, grounded and professional the man is. Producer Jack Abramoff discusses many of the film’s hurdles in Assignment: Africa.  It’s informative, but listening to Mr. Abramoff is like listening to my old high school math teacher.  Other extras include a still photo gallery, liner notes on the making of the film by Lundgren scholar Jeremie Damoiseau and reversible cover art.  I love my movie trailers and Synapse has never let me down in this department.  They give us the theatrical trailer (“His one mistake was a death sentence.  Their one mistake was not finishing the job.”) and a slew of television spots (“Some men go to war… Dolph’s just going to work.”) to enjoy.  Finally, a commentary track with director Joseph Zito and Mondo Digital’s Nathaniel Thompson is provided and it’s really a great listen.  I’m a fan of this type of commentary (Synapse tends to do these often), where the director is free to talk about the film, but when things slow down the scholar sort-of interviews him to keep the flow.  It usually results in a very candid discussion rich with information and anecdotes that the director alone, especially after 20+ years, most likely wouldn’t be able to self-muster.

Red Scorpion gets a solid 3 out of 4 devils.  I really miss the old days of Communist villains and the one man killing machine.  They really don’t make them like this anymore and the straight to DVD actioners with CG explosions simply don’t cut the mustard.  This film represents a bygone era as much as Dolph represents a bygone genre.  I’d love to see The Expendables 2 bring these movies back to theaters, but whether that’ll happen is anybody’s guess. In the meantime, just sit back and let Professor Lundgren teach you how to take out an Army, one man at a time.  No math skills required… unless you’re keeping a body count, Doc.