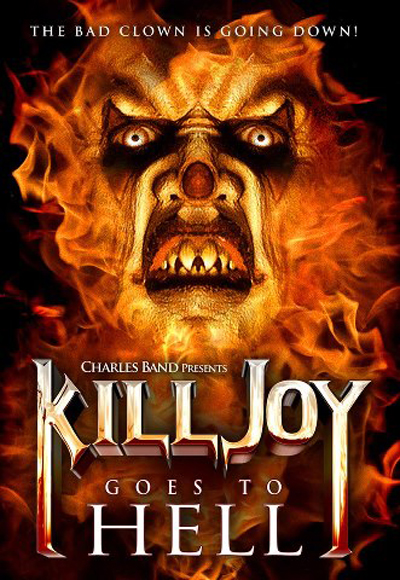 After being defeated in the third film, Killjoy (Trent Haaga) is resurrected to stand trial in Hell for not being evil enough.  Stripped of his powers, the daffy demon finds himself in a jail cell with a sad sack clown lawyer named Skid (John Karyus).  With help from his representation, Killjoy is able to summon his old gang of murderous merrymakers to testify on his behalf.  Unfortunately, Freakshow (Tai Chan Ngo) is a mime and Punchy the Clown (Al Burke) is a mush-mouthed brute who only speaks Carney.  His only intelligible ally is the succubus Batty Boop (Victoria De Mare), his ex-girlfriend with an axe to grind.  As the sexy DA Jezabeth makes her case, Killjoy and Skid realize their situation is getting more and more dire.  Their only hope:  Sandie (Jessica Whitaker) the would-be victim from the last chapter who managed to escape his wrath.  Now institutionalized, if she could only be brought to hell as a material witness to Killjoy’s evil ways, surely he’ll be vindicated… right?  Well, maybe.  Skid’s not the best lawyer and the scales of liberty aren’t exactly balanced in Satan’s courtroom.  If our anti-hero’s going to make it out of this in one piece, he and his pals are going to have to take the law into their own white-gloved hands.

The film is crazy, but well-paced. The characters are solid and the story is fun, but after a few drinks I found myself scratching my head at a couple of scenes.  Not that it matters.  The chaos only adds to the experience and I enjoyed every minute of it. 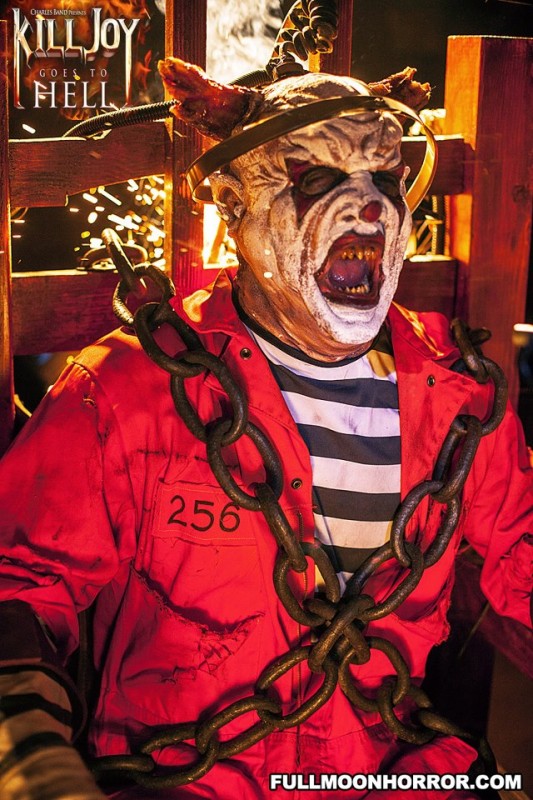 Kindness kills. Killjoy (Trent Haaga) finds himself on trial for being too nice!

Lechago gets some great performances from his actors.  Haaga, in his third outing as the Killjoy character, delivers as usual with his vicious, yet humorous charisma.  Newcomer to the series,  John Karyus does a nice job as the simpleton lawyer who’s (maybe) too enamored with his client, while Aqueela Zoll is a fantastic addition to Full Moon’s lineup of beauties as Jezabeth, the demonic DA.  However, the shining star of the film is Victoria De Mare playing the sinfully sensual Batty Boop.  Introduced in Killjoy 3, De Mare is given a much juicier part this time around as the filmmakers delve deeper into her love/hate relationship with the accused.  Like a supernatural Harley Quinn, Boop is sexy, but clearly off her rocker.  She’s got a black widow appeal to her that can’t be resisted, even if you know it’ll mean your doom.

For a film that was shot in only seven days, Killjoy Goes to Hell looks phenomenal. Colors are vivd and cartoony… like a comic book.   Details are sharp and the special effects/CG are as good as films made with four times the budget.  While the sound is presented in only a stereo mix, it is well done and as with most Full Moon features this film’s got a killer score.  It’s no secret that I’m a huge fan of Full Moon’s work and I’ve always said that for my money, they always get (and give) the most bang for the buck.  Well, it’s obvious on this picture… every cent is up on the screen.  It should also be noted that this is the company’s 256th film.  Most impressive! 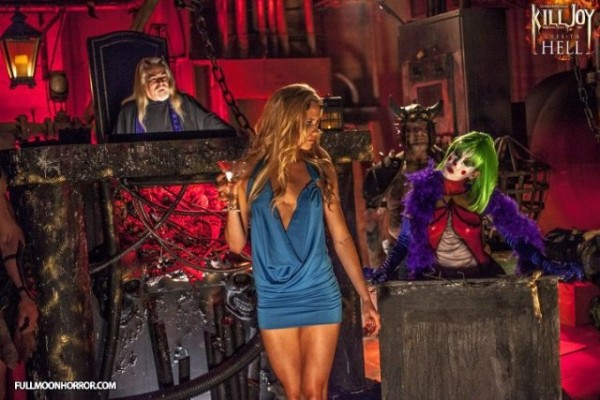 The only extras on this disc are a run-of-the-mill trailer reel that runs at start up and a short Behind the Scenes featurette.  I guess it’s worth watching, but if you buy this one (and you should if you’re a fan) you’re paying solely for the film.  If extras are your thing, you might want to wait and see if there will be a Blu-Ray release… I’ve seen the new Puppet Master Blu’s (reviews coming soon) and they’re loaded for bare.

Killjoy Goes to Hell earns 3 out of 4 reel devils.  If you’re a fan the series, this is quite possibly the best of the bunch and certainly worth the purchase.  I get the feeling that Charles Band is finally beginning to nurture this franchise as a staple of the Full Moon library and it’s about time.  Great characters and irreverent humor have made the Killjoy movies certified fan favorites.  Hell, I’ll be the first in line if they start taking orders on an inflatable Batty Boop doll.   I can’t get cited for doing anything with one of those, can I?