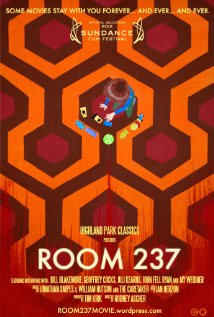 Ah, THE SHINING, how I love thee!  Let me count the ways! 1.) It has one of the most unhinged and scenery chewing performances of Jack Nicholson’s career. 2.) The ominous music by Wendy Carlos. 3.) The roving steadycam never letting you relax to ride your Big Wheel, knowing that those creepy twins could be around any corner. 4.) Also knowing that Scatman Crothers has kick-ass nudie paintings of chicks with afros in his kick-ass bachlor pad. 5.) The way it gets you to relate to the anguish of cabin fever. 666.) That overabundance of TANG in the Overlook’s pantry being proof that director Stanley Kubrick helped the government fake the moon landing.

When I first heard the buzz on this documentary, about five superfans of Kubrick’s 1980 horror masterpiece THE SHINING (Bill Blakemore, Geoffrey Cocks, Juli Kerns, John Fell Ryan, and Jay Weidner) I thought, “That sounds cool, but how is this any different than any DVD extra, and why is it warranting a limited theatrical release?” Within 30 seconds of Rodney’s Ascher’s documentary I realized why: it goes above and beyond, offering you some viewpoints that are truly on a mission to Jupiter with a broken computer.

First and foremost, in order to talk about this documentary, I do have to say that I like THE SHINING quite a bit. But as far as Stanley Kubrick’s work, I always found it to be relatively straight forward. It tells its story, tells it well, and apart from some ambiguity over weather the supernatural is present or everyone is just losing their minds and a general theme of the family unit breaking down, this was a high end big studio horror/drama along the likes of THE EXORCIST. An excellent movie, but still just a movie. The strange double and triple meanings of 2001: A SPACE ODDESSEY and A CLOCKWORK ORANGE were never really present with this one. Well, if the band of misfits interviewed in this documentary have anything to say about it, boy was I wrong! 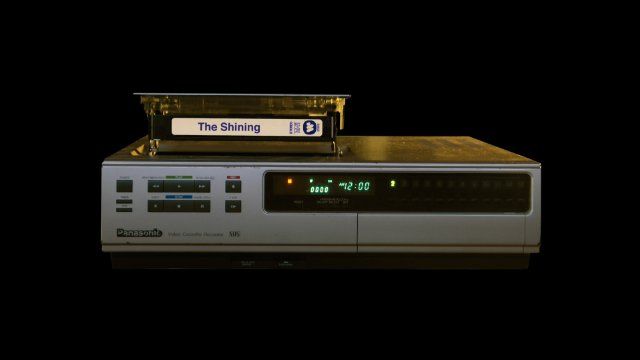 Get ready to PLAY with The Shining.

Taking a nod from famed documentary filmmaker Errol Morris, much of the material is presented in over-dramatized re-enactments. Close-ups of VHS boxes being opened, playing forward and back of one or two SHINING clips, computerized 3-D maps of the Overlook Hotel tracking little Danny’s movements, all while the interviewees recount their first experience with THE SHINING or Kubrick’s films in general. In addition, the film is rounded out using footage from almost all of Kubrick’s films, weirdly making Tom Cruise from EYES WIDE SHUT the lead at first. Various public domain films and other footage complete the pallet, most notably Lamberto Bava’s DEMONS for reaction shots of people watching it in the theater. the main music is very Goblin-eque.

The theories present themselves as pretty tangible to beyond the infinite. Many of the more appreciable ones I noticed viewing the film on my own, such as the hotel itself being a giant TARDIS like environment that doesn’t quite hold up to physics when mapped out. The creepy red bathroom is so big that it overlaps with the weird gold bar, the tricycle riding kid mysteriously switches floors, passing rooms that are known to be on the first floor when he is on the third, that kind of thing. As said earlier, there is a very interesting 3-D map of the hotel that keeps showing up to show the sprawling MC Escher labyrinth as a whole.  This portion is one of the most fascinating in the film. 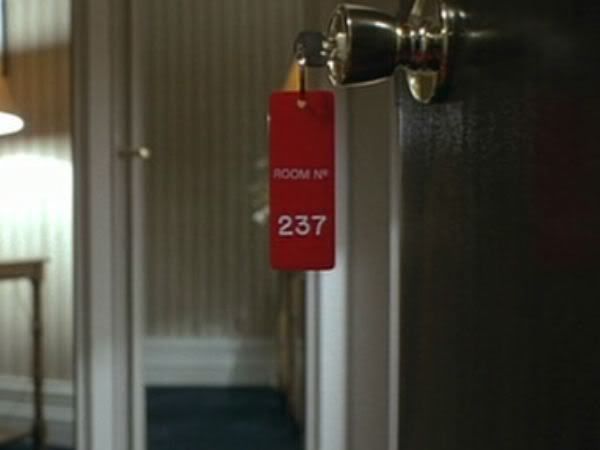 If only it were just a dead hooker in this room.

It is in these discernible theories that some info comes to light that actually improves my enjoyment of the original film. I won’t give away all the clues, because it would spoil the ride that this documentary offers, but I never noticed the Minotaur/Bull motif which leads to the climax in the maze. I also never knew of a theory that Danny (or his raspy REDRUM spouting imaginary friend Tony) is plotting against his father to drive him crazy from the beginning. Revelations like this make you want to give THE SHINING a new look with a fresh coat of paint. It wasn’t one of Kubrick’s more pedestrian works as I once thought, and is in fact deceptively complicated.

So far, so good. Nothing but some cool motifs that add to the film and a couple themes I didn’t notice. That can be said in any DVD extra. ROOM 237 dares to go weird and complex. I had heard that the film had some coo-coo theories in it. I figured it would build to those. But, right away I was hearing how THE SHING was actually about America suppressing its guilt for killing off the natives because there is an Indian head on the can of Baking Soda behind Scatman Crother’s head. There’s also discussion on how the whole damn thing is a World War 2 allegory. This movie cuts to the chase, gives you some pretty strange ideas up front, and then pulls back, as if to say, “bear with me here, it’ll make sense in a second!” 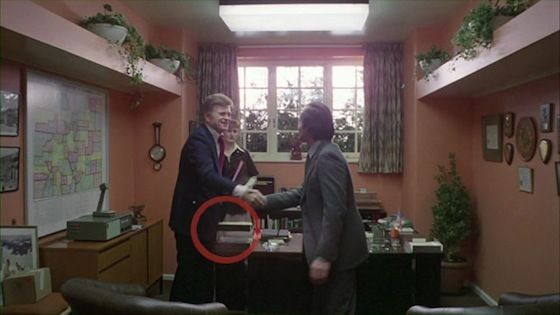 ROOM 237 gives us an outlook to the Overlook.

These slightly odd theories might be on to something. The film presents quite a bit of evidence to back it up. I know the Indian stuff is a common motif in Stephen King’s work, and pretty much everything made post World War 2 is a metaphor for World War 2, so why not? Its not like they say Stanley Kubrick faked the moon landing or anything.

Oh wait, I forgot! They do say that. A good portion of this film is dedicated to that, in fact. It is that moment when it changes from being about some film theorists with too much time on their hands, to the hint that at least one of them is outright crazy. The theory has something to do with that creepy second guy in the interview scene (Barry Drennen) also playing Pontius Pilate in JESUS CHRIST SUPERSTAR, too much TANG in the pantry and Danny wearing that Apollo 11 sweater.

I’m pretty open minded when it comes to film and literary theory. Marcellus Wallace’s soul is in that briefcase, THE SMURFS are an allegory for communism and it’s the Ghost of Orson Welles in 3 MEN AND A BABY. But man, I dunno about this shit. You’d think if there were clues to the moon landing, they would be in 2001 where at least they fit the outer space theme. The Overlook is haunted by ghosts, not little green men, pal… But then the guy talks for a little while, and get this…some of his clues make sense. They are forced, shoehorned and really stretching it in some cases, but if you are willing to go along for the ride and hear him out, you may find it weirdly rewarding. I suppose if anyone could fake the moon landing, it would be Stanley Kubrick.

That is the brilliance of this documentary. It never judges its subject. It never says what you should think of THE SHINING, Kubrick, or the interviewees. The theories that make perfect sense to the real wingnuts are all presented with equal parts objectivity and humor. Everyone gets their chance to speak their minds and no one is cut off for having too weird a theory. However, and I’m sure Kubrick himself would appreciate this, the documentary sometimes uses Mise En Scene to mock them, cutting to Nicholson leering in disgust to some of the more whacked-out moments, only to be followed up by a tidbit that makes you think they might be on to something. 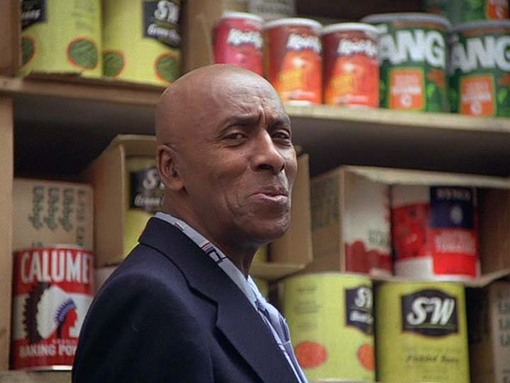 Scatman is disappointed that his favorite orange drank means nobody landed on the moon.

My only complaint about this film is a small one. All of the five experts sound exactly the same except for the one lone female. They never cut to a talking head to reveal which was which. Is the WW2 guy the same as the Moon Landing guy? Is the guy who was disappointed on his first viewing in the theater (yet could not stop watching it over and over again) the same guy who discovered that if you watch it backwards and forwards at the same time you get all sorts of hidden clues? We will never know. But that didn’t matter to me so much. As far as this documentary goes, you don’t need to know who said what, as much as just know someone out there said it. The real star of this movie is the maze known as THE SHINING, which there are many ways in, but no way out.

Which brings me to this: does this documentary hold up to those not familiar with THE SHINING? Would this be a good starter piece to those unfamiliar with Kubrick’s work and thinking of giving it a try? The simple answer to that is HELL NO! This movie actually asks a lot from its viewer. You shouldn’t just know THE SHINING, but you should have a passing knowledge of all of Kubrick just to keep up. Everything is referenced from the early black and white films (check out the hotel room number in LOLITA!) to EYES WIDE SHUT, many of which pass by quickly as if they were common knowledge. I personally watched THE SHINING the night before I viewed this and I’m glad I did, because it gets very specific pretty fast. In addition to Kubrick, I would also watch DEMONS and be somewhat familiar with Dario Argento as well, which are referenced so much that you wonder if Rodney Ascher has a documentary about that Godfather of gore up his sleeve! Spielberg’s SHINDLER’S LIST and Fellini’s SATYRICON are also referenced heavily, leaving no auteur unaccounted for. This isn’t a documentary for a beginning cinema enthusiast, this is more the master class.

I do feel that ROOM 237 is a very important film, and a great film to be coming out now. I have noticed a trend in newer movies to be about nothing more than what they are about. Don’t get me wrong, I like simple, fun movies as much as the next guy, but I have noticed a disturbing trend towards the extremely straightforward, matter of fact, nothing but the plot ma’am type of filmmaking. I have also noticed the fans not understanding that there CAN be something more. Anything that gets people interested in viewing and making films in different and interesting ways is a very good thing. The art form needs smarter and more complicated material in order to progress. What this documentary offers is an excellent film theory class. You may not agree with everything presented here, and that’s ok. But it does give you a crash course on how to look for and spot clues in the background and seeing the patterns of films. This documentary is both entertaining and informative, a great companion piece to THE SHING, as well as testament to the art of filmmaking as a whole.