Somehow, I missed the trailers for “Jack the Giant Slayer” (or I just wasn’t paying attention) and I certainly wasn’t wowed by the cardboard standees in the theater used to promote the film.  I mean, what IS that thing?  A giant stone Mayan turtle?  Whatever.  Everyone knows that fantasy films of this type nowadays are either ultraviolent retellings with zombies or Shrek -style fractured fairy tales with references to medieval versions of things like the iPad.  Besides, Jack and the Beanstalk  was one of my favorite stories as a child and I refuse to let anyone other than George Lucas rape my childhood.  Well lo and behold Warner Bros was able to wine and dine the 8 year-old in me and director Bryan Singer turned out to be the perfect gentleman.  No, my childhood wasn’t unwillingly fondled… but after the first 10 minutes, I was ready to put out.

The film does stray quite a bit from both Jack and the Beanstalk and Jack the Giant Killer (the film’s original title).  In this version Jack, an orphaned farmboy, lives alone with his uncle is forced to sell their horse in order to repair their leaky roof.  While in town, he sells the animal to a monk on the run in exchange for some magic beans along with the Mogwai-like instructions: do not get them wet.  Unhappy with the barter, Jack’s uncle throws the beans across the room and naturally one falls through the floor boards.  One rainy night, the Princess of the kingdom seeks shelter in Jack’s home.  The two share a love of adventure and quickly find one, as the leaky roof allows just enough water in to soak the magic bean and sprout a stalk that thrusts the modest home into the sky.  Jack is thrown to the ground as the Princess is lost up in the clouds.  Now with the King’s men, including the nefarious vizier to whom the Princess has been forcefully engaged, Jack climbs in search of the damsel.  Little do they know, they’re in for a BIG surprise at the top of that beanstalk. 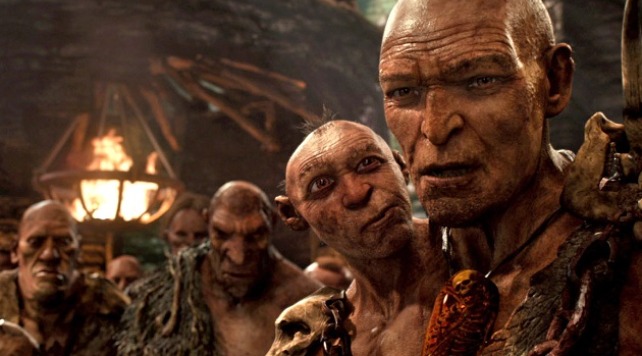 The story is your traditional adventure, familiar and somehow comforting.  Bryan Singer doesn’t kowtow to youngsters, keeping the giants disgusting and  vile while the action is sometimes intense with moments of violence.  Jack DOES kill giants, you know.  Even so, this is a movie the whole family will be able to enjoy.  The acting is top notch with vets Stanly Tucci, Ian McShane and Ewan McGregor all bringing fun performances to the screen, while relative newbie Nicholas Hoult (Warm Bodies) shows much promise as an up and coming talent.  The sets feel like you’re thrown into an old English folktale with nary a royal Starbucks in sight.  By the end, I wanted to visit a renaissance fair.  Or a Medieval Times restaurant.  Or to go gambling in Vegas at the Excalibur (though I’d probably stay at the Mirage). 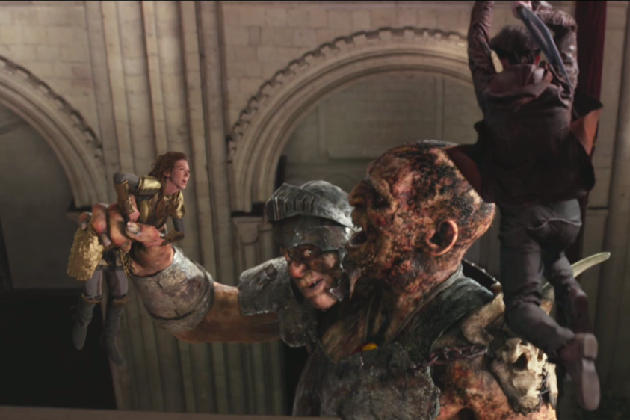 Jack (Nicholas Hoult) tries to chop this giant down to size. The Princess, does look tasty, though…

I caught this film in IMAX 3D, and I have to say it was impressive.  I’m referring less to the 3D and more to the IMAX – if you’re going to see a movie where your hero is battling an army of giants, you want a huge screen, right?  The 3D however didn’t stand out.  I guess you could say this is a good thing as there were no “dimensional gimmicks” and it wasn’t distracting, but why pay the extra cash for something that’s not really wowing you?  It’s true, the film was actually shot in 3D (usually a good sign for fans of eye strain), but with such heavy reliance on CGI, much of the third dimension was created in post.  Personally, I have nothing against 3D and would choose it above a 2D print if the price were the same, but if money is a factor, you’re not missing much in the more traditional format.  While you could wait for the Blu-Ray release, I do think “Jack” benefits from being seen the big screen.

Originally, “Jack the Giant Slayer” was to be released in the Summer of 2012.  It was said that WB pushed it back to finish the 3D and could afford to do so because of “The Dark Knight Rises” being released around the same time.  I’d say that in the end, it was probably a good decision to hold off.  I’m not entirely sure the film would’ve done well during blockbuster season.  While this time of year is typically reserved for less… um, prestigious pictures,  “Jack” is still a lot of fun and the best bet if you don’t want to take the family to a film about drunken debauchery or anything involving an exorcism.