OZ THE GREAT AND POWERFUL – in theaters now from Disney

Pretty much every red-blooded American child has seen the 1939 classic “The Wizard of Oz”.  It’s almost like going Trick or Treating or drinking a Coke.  It’s unforgettable music and unbridled imagination has made it a cultural staple for young and old. Maybe that’s why anything in the form of a prequel, a sequel, a reboot or a “reimagining” would be met with harsh skepticism.  I mean, remember “New Coke”? Well on March 8,  Disney, a company very familiar with retelling classic children’s tales, treads on hallowed ground with “Oz the Great and Powerful”.  Flush with mouse money,  this prequel comes loaded with special effects and big names, but can director Sam Raimi (“The Evil Dead”, “Spiderman”) deliver a quality story to win over the tiny hearts and boundless minds of children everywhere?

For the most part, yes, he does.  Everything in “Oz the Great and Powerful”  is kind of a setup to the Judy Garland picture.  We start back in Kansas, 20 years before Dorothy Gale and her little dog embark on their own adventure.  Oscar Diggs (James Franco), a magician/con-man in a travelling circus, just finishes a show.  Money is tight and Diggs, who’s world revolves around fame and riches is frustrated with how his life is turning out.  Things get worse after the husband of one of his many conquests’ (who happens to be the circus strongman) learns of his wife’s indiscretion and comes after Diggs.  Our antihero , more of a fornicator than a fighter runs for his life and hides in a hot air balloon.  Taking to the skies, Oscar is safe from his pursuer, but in full danger of a spiraling tornado.

And the rest is history.

The tornado sends him to Oz (as all tornados do) and on his arrival, he’s thought to be a wizard sent from the heavens to fulfill a prophecy of freedom for the land.   Found by an innocent  young lady named Theodora (Mila Kunis), Oscar is brought to the Emerald City to meet with her sister, the late King’s advisor, Evanora (the lovely, Rachel Weisz), who explains the prophecy.  If he can kill the Wicked Witch by destroying her wand, he will become the King of Oz and all the land’s riches will be his.  Now, armed only with the help of a broken china doll and a winged monkey in a bellhop suit, he sets off to free the land.  But of course, this won’t be easy – especially for a man who’s all talk and no magic – as nothing and nobody in Oz is as they appear.

Good and Evil isn’t always black and white. Oz (James Franco) is a con-man who wishes to be great.

Sam Raimi makes some very interesting choices with the film.  First off, it’s funny.  There are plenty of laughs to be had, especially at the scheming, kind of sleazy wizard who’s just the kind of huckster you’d expect from a travelling circus in the dust bowl.  There are also a few double entendres, to let you remember that this isn’t a movie that’s pandering to children.  Next, as if to drive that point home further, the film has some moments that will make you jump.  These witches aren’t your sultry Maleficent-esque Disney witches. Well, sometimes they are.  But when you get to the final showdown between Glenda, the good witch and her wicked nemesis,  things take on an “Evil Dead” flavoring.  Quick zooms into the withered, cataract blinded face had me thinking “I’ll swallow your soul!” (and squirming in my seat with delight.)

He’s also somewhat sparing with the gimmick of 3D.  If you’ve seen the “Jurassic Park 3D” teaser scene (when the kids are being attacked in a jeep by a very angry T-Rex), you might’ve felt as I did:  The 3D was just too much.  The scene is as intense as it was in 2D, maybe more so, but the depth of field is eye-straining.  Sometimes less is more.  In the case of “Oz”, Raimi, brings you into the world of Oz.  The story keeps your entranced enough that the 3D just feels natural and enhances the beauty of the surroundings.  When something does pop out at you, it doesn’t feel forced and I even caught myself flinching a few times.

Gorgeous, fanciful landscapes make up the land of Oz. Even more magical are her inhabitants…

Ironically, with all this technology at his disposal, the director chooses to keep the film true to the 1939′s effects.  For example,  when Diggs lands in Oz, we’re brought into a big, bright technicolor world. The same world Dorothy was brought too.  The skin tones are just a little too red, the yellows pop more than they would in real life.  It’s made to look just like it was colorized and it’s nostalgic and beautiful.  When we get a good look at the land of Oz, flowers made of jewels bloom and sparkle, looking as realistic and as expensive as the popcorn in front of you.  Yet the Emerald City in the background looks like a backdrop.  The Wicked Witch flies on her broom with digital smoke shooting out behind her, but it still looks like some sort of can billowing out clouds of black in the same clunky style as the 30′s effect.  The picture is a visual effects spectacle, but it never once undermines the primitive magic of the original. 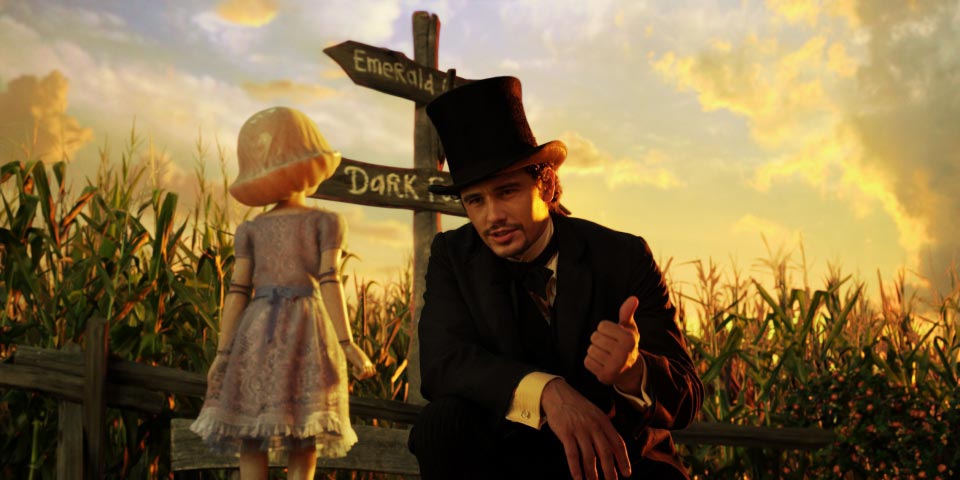 Forget it Oz, it’s China Town. Better head to the Dark Forest, instead.

The performances are solid.  I’d heard that Robert Downey Jr. was originally attached as Oscar Diggs which would’ve been perfect.  Unfortunately, RDJ can’t be in everything.  But I did buy Franco as the Wizard, though he often treads awfully close to being irredeemable.  He’s a believable ladies’ man, has a certain charm to him and is clumsy enough for us to believe that he’s a bumbling idiot trying to fool the world that he’s more than he is.  Is this Wizard ever great?  No, but he’s Oz the Plenty Good Enough.  Michelle Williams nails the Glenda, the Good Witch character with her sweet, yet reserved delivery and Rachel Weisz is perfectly sketchy as the shifty Evanora.  My biggest problem was with the uneven performance of Mila Kunis.  While she’s always something to look at, her acting felt both flat and over the top at the same time.  The heart that lies somewhere just in the middle managed to elude her resulting in an uninspired performance for the most fascinating character in the film.

“Oz the Great and Powerful” scores 3.5 angels out of 4.  It’s not a masterpiece, but I do consider it a great film. Possibly my favorite of 2013, so far.  I don’t think it will go the same distance as the classic “Wizard”, but it’s certain to spark a long lasting franchise that will ensure the legacy of the original for decades to come.    And just like that other famous Wizard, “Oz” will surely have kids and adults alike rushing out to bookstores again.  Talk about something great and powerful.