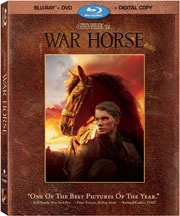 I really liked this film and there are far worse movies to be compared to than the three I’ve just mentioned, but something seemed a little off.  First, let me just say I’m a pretty big Steven Spielberg fan, as most are.  While I think most of his post-”Schindler’s List” films have been hit or miss, on the whole it’s safe to say that anything with his name on it will, in the least, keep you entertained.  That’s good enough in my book, but the cynic in me thinks it’s not enough for Spielberg.  I think he’d like more critical acclaim and possibly another Oscar.  Watching the film, I could almost hear him on the phone with his assistant asking her to find him a project that’ll “bring ‘em to tears with action and emotion,” and he completely succeeds.  However, I felt at times it could be cheesier than a box of Kraft Dinner.  More on that later.

If you missed the film in theaters, here’s a little taste of what it’s about.  Ted Narracott (Peter Mullan) plunges himself into massive debt buying a thoroughbred horse instead of a more suitable animal to plow his field.  Now he’s in danger of losing the farm, but against all odds, his son Albert (in an incredible performance by newcomer Jeremy Irvine) bonds with the creature and is able to train him.  Sadly, their harvest fails and Ted is forced to sell the horse, whom Albert has named Joey, to the British Army – now entering war with Germany.  Albert promises Joey that they’ll be reunited, which seems unlikely since he’s too young to enlist and the horse is to be shipped off to France.  Shortly thereafter, Joey is captured by the Germans and so begins a journey through the hands of different masters.  Oddly enough, no matter where this horse ends up, he brings humanity to the people around him.

Back to the cheese.  It’s a touching story, but at times I felt like I was watching an equestrian “Zelig”.  One minute Joey’s a British farm horse, then he’s in the Army, then he’s in the German Army.  Now he’s a French farm horse.  Now he’s in the German Army again and so on and so forth.  It also felt slightly manipulating to me.  You know how actors will pause for a joke on a sitcom to give the audience (or laugh track) a chance to laugh?  Well, sometimes it’s obvious that the pause is less of an opportunity to let them laugh than it is a cue – just look at any episode of “Meet The Browns”.  There were several times through “War Horse” where I felt the “cue” to be sad or upset.  Or maybe I felt the “cue” to smile or feel uplifted.  This could legitimately have been Spielberg tipping his hat to the somewhat sappy films of yesteryear (the digitally enhanced sunset at the end of the film could have easily been pulled from the technicolor world of Gone With The Wind), but even so it had the opposite effect, tugging me out of the story. 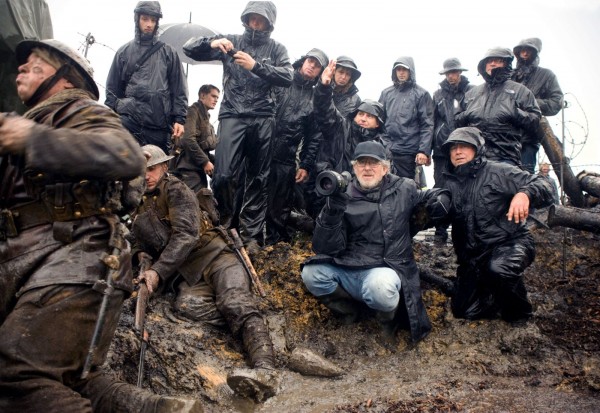 Spielberg directs WWI with every bit as much intensity as he did WWII in Saving Private Ryan. Instead of Tom Hanks, he uses a horse this time around.

That’s not to say there aren’t plenty of genuine moments in this film.  There are some great scenes, such as Albert and Joey finally proving the town wrong by plowing their field in a rainstorm and the entire battle in No Man’s Land is nearly as intense as anything in “Saving Private Ryan”.  I think the single most engaging moment is a scene in which a British soldier waving a white flag, crawls out of his trench in an attempt to free Joey from barbed wire smack dab in the middle of No Man’s Land.  He’s met by a German who brings a pair of wire cutters.  For that little while, the war is put on hold.  These two men join together to free the wounded animal, only to find that they’re not very different from one another.  Yet they know that in the morning they’ll be shooting at each other once again.  It’s the least cinematic scene in the picture, seeming like it came directly from the stage, but it’s absolutely mesmerizing.

This brings up another issue. “War Horse” is based on a play, which in turn was based on a novel.  I haven’t read the book or seen the show, so I found myself wishing for an extra feature that talked about the screenplay.  Where did the screenwriters deviate from the play and what, if anything, was taken from the book?  While this wish went unanswered, the disc has a few extras that some may find worth watching.

First off, Touchstone Home Entertainment was kind enough to send me the 4 disc set to review.  Disc four is a digital copy of “War Horse” with no extras, but the third disc is a DVD version containing a documentary on “The Look” of the film.  From the rolling hills of England to the burnt out trenches of No Man’s Land to the handmade uniforms on the backs of every soldier on the screen, this is one gorgeous movie.  Unfortunately at six and a half minutes, this featurette goes into very little depth and seems like more of a snack than the steak it could’ve been. I guess that’s why it wasn’t on one of the Blu-ray discs.

The second disc is Blu and strictly for extras.  The documentary “A Filmmaking Journey” is really the big dog here, clocking in at over an hour and going through every aspect of bringing this adaptation to the big screen.  Spielberg doesn’t do commentaries, but he talks enough throughout and it’s pretty damn interesting.  It’s not exactly a dream replacement, but there’s a lot of information provided.  I would’ve liked to hear him talk a little bit about what influenced him and cinematographer Janusz Kaminski on the look and feel of this picture, but it is what it is.  There’s also a short featurette titled “Editing and Scoring” which is about exactly that and an even shorter one on “The Sounds of War Horse”.  Another extra, “Through the Producer’s Lens”, is about 4 minutes of what seems like outtakes of Kathleen Kennedy’s interview for “A Filmmaking Journey” and feels closer to a recap of what was said in the other bonus features. 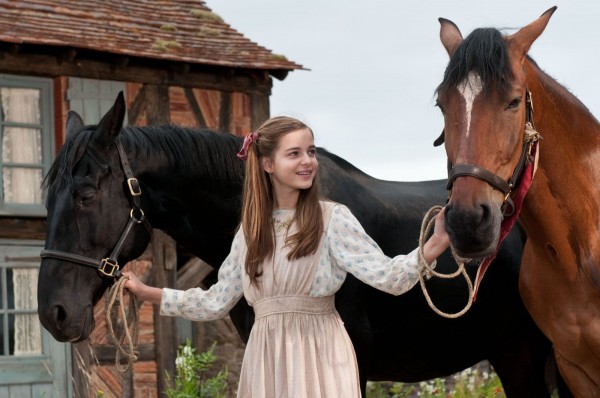 Emilie (Celine Buckens) and Topthorn (left) are some of the many characters Joey meets on his journey.

The first disc, is mostly the feature film, but there’s a quick bit on “An Extra’s Point of View”, looking into what it was like to reenact WWI as a background artist.  “War Horse: The Journey Home” is kind of a round table discussion with the cast and production team about the film.  It’s nice to hear them talk and at nearly twenty minutes this is the second longest bonus feature in the set, but none of it seems necessary.  I would’ve really liked to have seen a teaser and/or theatrical trailer thrown in, but you can’t win them all.  Thank God for YouTube.

All in all, “War Horse” is a beautiful movie with great acting.  It’s not Spielberg’s best by any means, but it is a good film, albeit an occasionally sappy one.  If you’re a fan of old-fashioned tug at the heartstrings kind of movies, this one’s for you.  If you saw it in the theater and enjoyed it, I’d recommend it based solely on the quality of the imagery, as the extras are merely ok.  But if you’re on the fence, I’d suggest saving it for rental on a rainy day.  You may be pleasantly surprised, but it’s certainly not a film worth blindly plunking down twenty-five dollars for.