THE SECRET OF KELLS (Streaming Review) 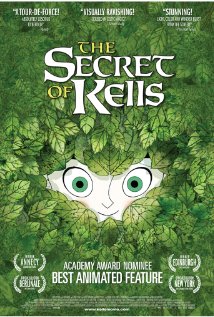 THE SECRET OF KELLS now streaming through Amazon Instant Video

Sadly, 2D animation has mostly gone the way of the dodo.  Well, here in the United States, anyway.  Yet foreign animators show us time and time again that fancy computer drawn graphics don’t necessarily make a great movie.  “The Triplets of Bellville”, “Persepolis” and pretty much anything done by Hayao Miyazaki make it easy to remember the art behind the drawings.  We continue St. Patrick’s week with another 2 dimensional modern classic: Tomm Moore’s “The Secret of Kells”.  The film, inspired by “The Thief and the Cobbler” and Disney’s “Mulan”, both of which were drawn in the styles of the culture and era they were representing, is one of the most beautiful movies you’ll ever watch.  The story, rich with Irish mythology, is pretty damn good too.

The story takes place sometime in the 700′s.  Brendan (Evan McGuire), a young boy growing up in the Abbey of Kells, spends his days in the scriptorium studying the work of the master illuminators.  They tell him of Aiden of Iona (Mick Lally), the wisest of all the illuminators who’s working on a magical book that will bring light to the world’s darkness.  One day, Aiden shows up to take refuge at Kells.  Only carrying with him the unfinished book and his cat, Pangur Ban, he has managed to escape the murderous Vikings who ransacked and destroyed Iona.  Allowing Brendan to look through his masterwork, the aging Aiden asks him to help in its completion.  Defying his uncle, Cellach the Abbot of Kells, Brendan ventures out on a series of tasks that lead him through the dangerous lands surrounding the fortified walls of the Abbey.  Befriending a forest spirit named Aisling (Christen Mooney), the boy’s eyes and mind are opened to the miracles of the enchanted world around him.  As he absorbs more of the forest’s beauty and wonders, he is able to contribute more and more to the book.  But Cellach isn’t fond of his nephew disobeying him and puts a stop to the work.  With the Vikings are on their way, he and Aiden must find a way to complete the Book of Kells before everything is lost to the darkness. 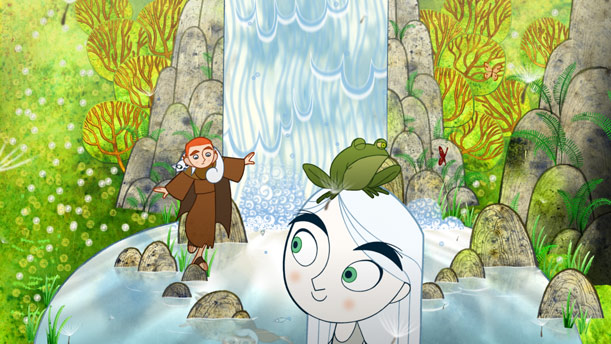 Brendan and Aisling venture into the enchanted forest.

After watching the movie, I decided to look into the history of the Book of Kells (sometimes known as the Book of Columba).  Not surprisingly, the Wikipedia entry, found here [http://en.wikipedia.org/wiki/Book_of_Kells] is quite extensive and describes the book as “Ireland’s finest national treasure.”  Known as a masterpiece of Western Caligraphy and representing the very best of Insular Illumination, the art found in the Book of Kells can be found here[http://digitalcollections.tcd.ie/home/index.php].  The filmmakers have not only impressively borrowed the art style, but bring it to life with a beautiful, psychedelic majesty that’s plenty of fun to compare with the original drawings. 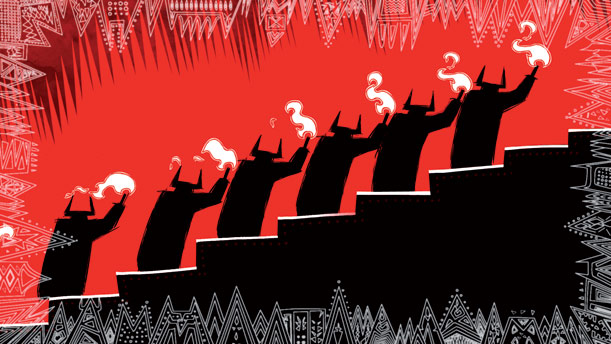 While much of the story and the characters were made up for the film, the basic history is there.  The time periods are correct and the Vikings had attacked Kells numerous times.    But at its heart, this is a fairy tale and the filmmakers take plenty of liberties with a history that I suspect is common knowledge to the average Irishman.  ”The Secret of Kells” in many ways comes across like a biblical “Zelda” game and I mean that as a compliment.  it’s pretty epic for its 75 minute run time, bringing Brendan from an apprentice locked away in the Abbey to a hero that battles the forces of darkness.  The subject of religion is brought up no more than in, say, Disney’s “Hercules”… maybe less since there is no direct referral to a God of any sort.  What we’re given is a straight forward adventure film, soaked with mysticism and gorgeously presented in a way that children and adults alike can enjoy.