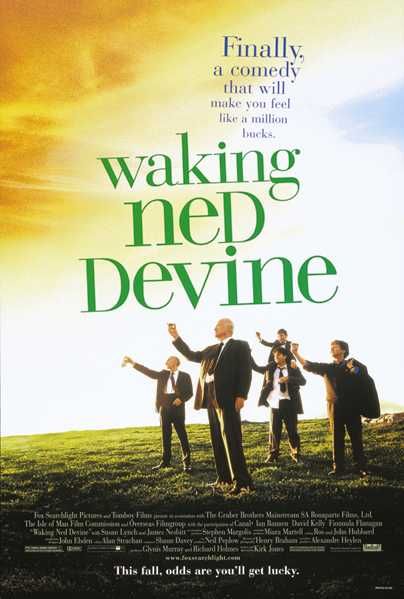 What a lucky week for our readers!  So far we’ve explored Ireland’s fables, love, war, religion, music and of course, beer.  Now, day 7 of CJD’s St. Patrick’s Week, we reach the end of the rainbow and everybody knows what’s found there.  Gold.  Lots of it…  $6,894,620 worth, actually.  Today we take a look at director Kirk Jones’ “Waking Ned Devine”, a little fable of greed, money and community.  As such I pose a queston: What would you do with a pot full of money?  Better yet, what would you do with someone else’s pot full of money?

The movie opens with a scene that plays out like a good old fashioned joke.  A man, Jackie O’Shea (Ian Bannen) sits in front of the television as his wife, Annie (Fionnula Flanagan) cleans up in the kitchen.  Jackie calls to his wife asking her to bring out his dessert.  “Get it yourself!” she answers.  “I can’t, the lotto drawing has begun.” he responds.  The first number pops up… it’s a match.  Jackie smiles.  He calls to his wife for dessert again and again she tells him to get up and serve himself.  The second number pops – another match! Same with the third and fourth.  He calls Annie in; they’ve got four numbers!!! The fifth pops… it’s good! She sets her plate down on the table and crosses her fingers.  His eyes get wide as he holds his lottery ticket tight.  The sixth number pops… and it’s good! Laughing hysterically, Jackie repeats, “yes, yes, yes, yes, yes!” and tears up the ticket! His wife jumps to her feet, “What are you doing? I thought that ticket was a winner!” “No,” he says picking up her plate, “but it got you to bring me my dessert!” He takes a bite and she slaps him across the face.

The dialogue is better than I’ve written here, but the mood is set for the film.  While Jackie didn’t win the lottery, somebody in their small town of about 50 people did.  Jackie and his best friend Michael O’Sullivan (David Kelly) set out to determine who the winner is, in hopes of befriending them and sharing in the wealth.  After wining and dining nearly everyone in town (and spending a small fortune in the process),  Jackie finds the lucky townsperson: Ned Devine.  But there’s a problem.  He finds Ned at home clutching the winning ticket, dead as a doornail.  Turns out the shock of winning killed the poor guy.  That’s when the scheme is hatched – they’ll pretend to be Ned Devine and claim the winnings.  It seems like a slam dunk as the deceased has no family, but when a representative from the Irish national lottery arrives to confirm Ned’s identity, things get tricky. It becomes apparent that in order to make this work, they’ll need the help of everybody in town… or else spend the rest of their lives in jail for fraud.

“Waking Ned Devine”  is great fun for young and old alike.  Kirk Jones fills this light-hearted tale with humor and the sweet sentiment of friends, neighbors and family being the measure of true wealth.   To further illustrate this point, every single one of these villagers is an eccentric gem of a character.  The wacky population of supporting characters includes lovestruck pig farmer, Finn (James Nesbitt), single mother Maggie O’Toole (Susan Lynch), slimy lothario Pat Mulligan (Fintan McKeown) and the evil spinster Lizzy Quinn (the wonderful Eileen Dromey).  But the most touching relationship probably revolves around Jackie and Michael.  These lifelong friends would be right at home in any buddy film and both actors have a chemistry that just clicks on screen.  One particularly touching scene has Jackie eulogizing his old friend, who’s sitting in attendance at what’s sort-of his own funeral.  Now that I think about it, while the film isn’t all about older folks, it does seem that most of the people in this tiny village are over 65.

Maybe the sequel will be a zombie film.

In any event, “Waking Ned Devine” will awaken your funny bone and touch your spirit.  I give it 3.5 of 4 angels for being the most fun you’ll ever have watching a senior citizen riding nude on a motorbike.  Trust me – I know.  When my Uncle Flynn gets drunk and becomes “Naked Fonzie”, it’s not at all funny and it usually ends with some pretty embarrassing road rash.