OLYMPUS HAS FALLEN in theaters now

One man.
Insurmountable Odds.
No outside help.
Alone in an impenetrable location.

Where have we seen this before? Oh yeah, “Die Hard”, “Under Siege”, and I guess “First Blood” to an extent (if you count the Pacific northwest forest as an impenetrable location). That’s the gist of “Olympus Has Fallen”, which isn’t to say it’s a bad thing because that’s always a fun plot to watch.

We first meet Agent Banning (Gerard Butler) at Camp David as he is the head of the president’s (Aaron Eckhart) Secret Service detail. They are on the way to a fundraiser when a tragic event occurs that causes Banning to be removed from the detail even though everyone agrees he did the right thing. He is then relegated to desk duty in the Treasury Department longing for the action of protecting the POTUS. 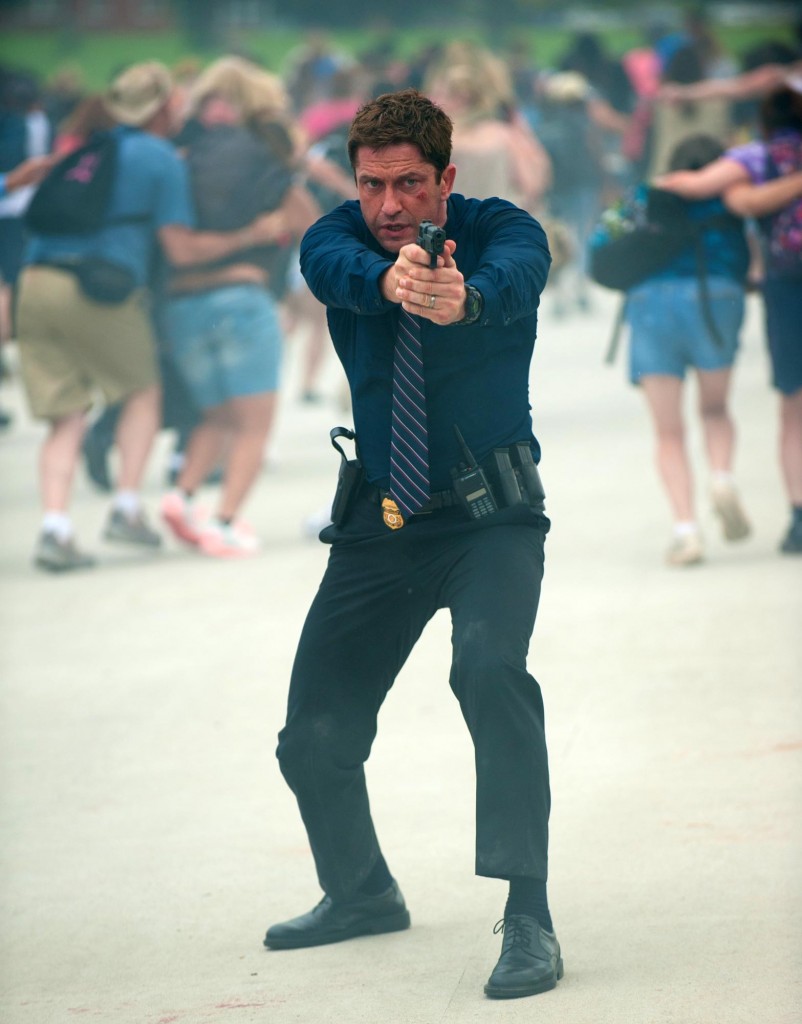 One day a contingent of South Korean delegates are visiting the White House for a conference with the president. This however is used by North Korean terrorists (cus who doesn’t believe the North Koreans are evil?) to launch an attack on Olympus which is the code name the Secret Service uses to refer to the White House. Suicide bombers, automatic weapons, heavy machinery and explosives are all used in the assault led by Kang Yeonsak (Rick Yune who seems to be the go-to guy for when Hollywood needs an Asian bad guy). Banning’s instincts kick in as he makes his way over and into “Olympus” taking out bad guys with stellar accuracy. 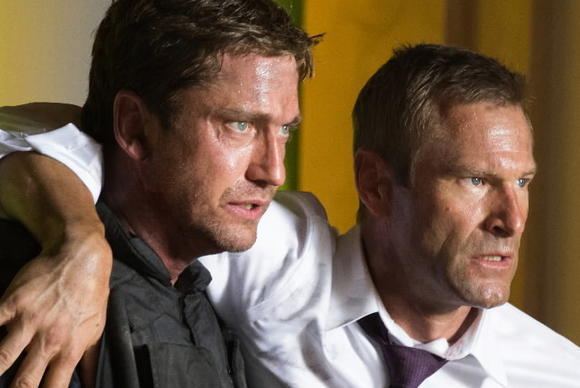 Banning and the President bond after a hard day at the office.

The movie really kicks it into “Die Hard” territory when Kang’s baddies have sealed the White House with booby traps, and taken over the presidential bunker. This is when Banning turns into Liam Neeson from “Taken” in dealing with Kang, i.e., “What I do have are a very particular set of skills; skills I have acquired over a very long career. Skills that make me a nightmare for people like you”. He then puts his knowledge of the White House infrastructure gained from his years serving in the White House to use methodically eliminating and interrogating the terrorists. I loved the fact that when he captures them, he gets what he needs then doesn’t mess around leaving them tied up or knocked out. Nope, he just straight up takes them out like any good hero should do when faced with overwhelming odds. Butler totally holds his own and is completely believable in the action scenes. It’s great to see him back to doing what he was meant to do when we saw him as King Leonidas in his first true action movie “300″. Butler has the badass hero attitude down pat but he’s also able to show us a softer side as he deals with the President’s son who is trapped as well. Aaron Eckhart is very good as a President who is dealing with family tragedy and then is able to switch gears to a leader who does not negotiate with terrorists yet cares for his staff as well. Rick Yune is always a great bad guy and in this movie is especially despicable in the lengths he will go to to accomplish his goal to destroy the United States, and how he attempts it is a first for me and definitely a “Could this really happen?” question for afterwards. Poor Morgan Freeman, it just seems every time he’s in a political office, disaster just seems to follow him. I mean, a meteor hitting earth during his term as President and now terrorists taking over the White House and he, as Speaker of the House is thrust into a the role of acting Commander-in-Chief and must make the crucial decisions to try and save the POTUS and his staff yet preserve world peace.

I get the feeling he does this a lot…

I went into “Olympus Has Fallen” with modest expectations of just another action movie about terrorists/world peril blah blah blah, but came away pleasantly surprised as I didn’t find myself questioning Banning’s decisions with the usual “Why wouldn’t/didn’t/can’t you?” we tend to do to the on-screen heroes. He did everything I would do in that situation (albeit a lot better accomplished than if it was myself). It’s a solid action movie full of explosions and gunfire that would fit right in if it had been released for the July 4th holiday. Instead we get one of the year’s solid action films 4 months early.