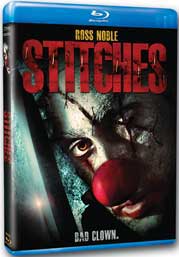 I don’t get clowns. They’re supposed to be happy and make you laugh, but so many people find them terrifying. My friend Steve actually yells “Yikes!” in his husky smoker’s voice whenever he sees one. It’s pretty funny (if a bit over-dramatic), yet he illustrates how clowns are a legitimate fear of many. How else could you explain the successes of “It”, “Killjoy” or the appropriately titled “Killer Clowns from Outer Space”? Even “Seinfeld” explored the phenomenon with the episode “The Opera” where “Crazy” Joe Davola dresses as a clown and scares the shit out of everyone. Now, Irish filmmaker Conor McMahon (Dead Meat) takes his turn scaring you with a circus psycho in “Stitches”, coming to DVD and Blu-Ray April 2 from MPI/Dark Sky Films.

Richard “Stitches” Grindle (British comedian Ross Noble) is a party clown. A dirty, sleazy lowlife of man, he’s not particularly good at his job – which is mostly entertaining children. Not that his clients are all that great, themselves. On one particular gig, Stitches finds himself working little Tommy’s (Tommy Knight) 10th birthday party and the crowd’s a tough one. He’s mocked, flipped off, has a drink dumped into his hat and… oh, yeah…gets killed. Accidentally, of course. When one of the kids ties his laces together, Stitches gets the biggest laughs of his show faceplanting onto a knife used to cut the birthday cake. Ouch!

Six years later, the adorable little brats are awkward adolescent punks who have, more or less, conveniently dispersed into horror-friendly cliques. Tommy is the shy everyman, Kate (Gemma-Leah Devereux) is the girl-next-door he crushes on, Sarah (Roisin Barron) is the slut and Paul (Tommy Cullen) is the bully. There’s also the photo geek, the best friend, and the gay kid… but none of this matters; as the genre dictates: they’re all going to die. 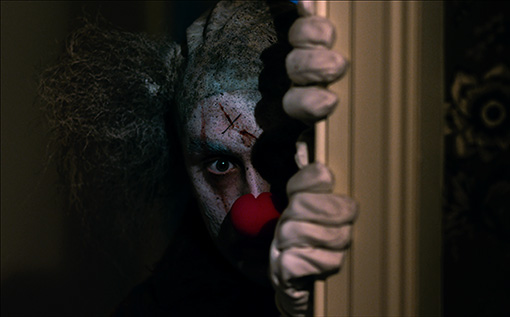 It turns out, there’s an ancient brotherhood of clowns and it’s common knowledge to them that should one die before finishing his show, he doesn’t rest in peace… and “the joke isn’t as funny the second time around.” Now, on Tommy’s birthday weekend, a party is inevitable and everyone will be there. Perfect for a zombie clown thirsting for vengeance!

Being the “yank” that I am, I was unfamiliar with the comedy of Ross Noble.  After watching some of his bits on the YouTube, I could see why McMahon had cast him in the title role.  He’s got a biting sense of humor and while Stitches himself isn’t funny in the world he inhabits, Noble makes him hilarious for the audience.  While his die hard fans were surely scratching their heads over why he’d choose a horror as his feature film debut, Noble fully embraces both the character and the opportunity to show that he’s more than a funnyman.  While “Stitches” may start off like any other movie centered around a comic, it doesn’t take long to realize that this is a slasher film through and through. This clown is vicious as hell and Noble plays his creepiness to the hilt.  Think Freddy Krueger with a squirting flower.  It’s tough to imagine someone like Jim Gaffigan having the balls to scoop an ice-cream sundae out of a young man’s brain matter, but Noble rolls the dice and comes out winning. 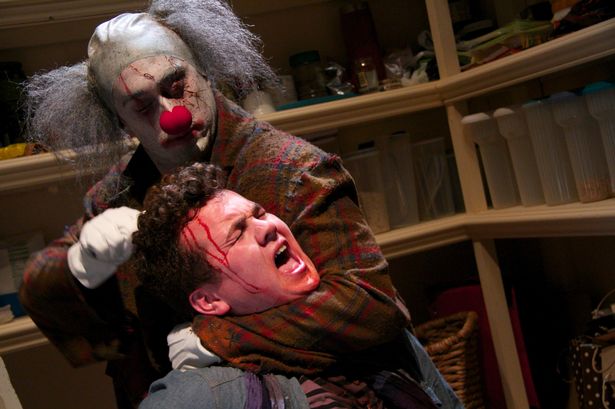 This “Good Humor” man serves up a treat you’ll scream for… but it’s not frozen.

“Stitches” is everything you could want from this kind of movie: loads of fun, juvenile humor and plenty of dark, gory kills.  Using both digital and practical FX, the filmmakers treat us to top-notch, cringe-worthy gross-outs like intestinal spills, poked out eyeballs and even a penis getting ripped clean off of its owner!  Clearly drawing inspiration from the 1980′s heyday of teen slasher films, McMahon even sets one of his finer death scenes to Cutting Crew’s “(I Just) Died in your Arms”. It just doesn’t get much more 80′s than that. Despite the cartoon-y nature of the film and it’s cliche cast of teen victims, “Stitches” does the genre proud.

More impressive than his successful blending of humor and horror, McMahon (Who co-wrote the picture with David O’Brien) sets up a fairly rich clown mythology involving mystical eggs and an entire troop of undead entertainers hiding in a graveyard. They reminded me a lot of “Hellraiser’s” Cenobites and are beautifully set up with the promise of an even more devilish sequel. 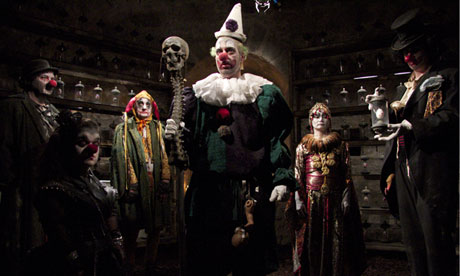 These guys don’t “clown” around.

Presented in 5.1 DTS Master Audio and 2.0 Lossless PCM, this Blu-Ray sounds as clear as it looks.  The extras, however, are a bit sparse.  There’s a 20 minute “Making of” featurette (where Conor McMahon unsurprisingly names “Evil Dead 2″ and “Dead Alive” as two of his favorite horror films) as well as a short blooper reel.  The basic trailer and Director/Star Commentary are also included. Not much to write home about, but I’ve seen bigger releases from larger companies that only include a handful of trailers for OTHER movies… so it could have been worse.

Scarier than a Troma movie and more irreverent than anything from Lionsgate, “Stitches” is a wonderfully sophomoric comedy wrapped up in a full on bloodbath.  I’m giving it a strong 3 out of 4 devils for being so damn fun; a great film to watch with a group of friends.  But be warned: if you know anybody who has a phobia of clowns, you may want to keep them away from this one.  Having to hear “Yikes!” every 20 seconds is enough to inspire a real life killing.