The Place Beyond the Pines (Film Review) 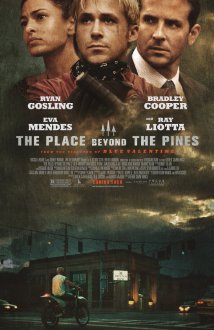 THE PLACE BEYOND THE PINES in theaters now

Cinema Judgement Day contributor, Schnookems, just came back from “The Place Beyond the Pines”.  I’ve heard a lot about this film in recent weeks and am looking forward to seeing it myself. Also remember, if you’ve seen a movie that you’re feeling passionate about and would  like to review it for the site, feel free to email us here. Now without further ado… Schnookems!

I just saw Derek Cianfrance’s The Place Beyond the Pines; an interesting film divided into three stories that are all interwoven with each other over a couple decades. The picture isn’t yet in wide release, but it will be on April 12th and it’s not like anything you’ve seen in theaters lately.

We start with Luke (Ryan Gosling), a motorcycle stunt driver who’s knocked up Romina (Eva Mendes) in the small town of Schenectady, New York. When he learns of her pregnancy, Luke quits his job and teams up with Robin (Ben Mendelssohn), a local mechanic. Robin convinces the father-to-be to start robbing banks. Shortly after, we begin the second act of the film where Avery (Bradley Cooper), a rookie cop, comes in to stop Luke and becomes a hero. Cooper’s character has a new family with an infant and wife (Rose Byrne), who wants only the best for her family. Avery’s story continues with him trying to do the right thing in a corrupt police department. The third act starts 15 years later and focuses on the sons of both Gosling and Cooper’s characters. Both have their own problems of coming from broken homes. To avoid spoilers, I won’t go into detail, but this is the act where we find out how all the characters and storylines are related. 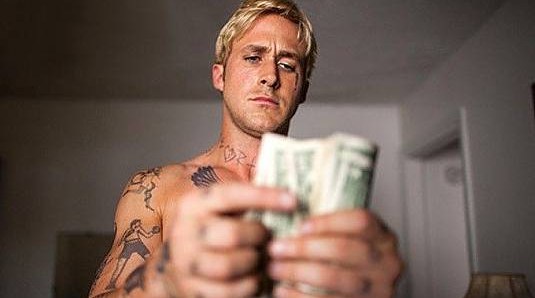 Now that you have somewhat of an idea what the film is about, here are my thoughts. The first act with Gosling is intriguing. It’s clever, it isn’t the usual story of a poor man with a specific talent forced to do something for a right reason (translation good with motorcycles, steals money to help out a girl he loves and his son). The movie starts out a bit slow, but Gosling robbing banks with a motorcycle is quite excellent. I love movies with bank robberies, maybe cause I used to work at a bank and hate it, I enjoy seeing it, but it helps the movie take that step to the next level.

By the time the second act starts, it takes a moment to realize it is Bradley Cooper (they do an awesome job making him look younger) it starts slowing down. Just to be clear, this movie is not a sprint, it is a marathon. It runs at 2 hours 20 minutes and does not move quickly. Like I mentioned above the story is divided into 3 acts, and this is the act where you may start looking at the watch to realize how much time has passed. 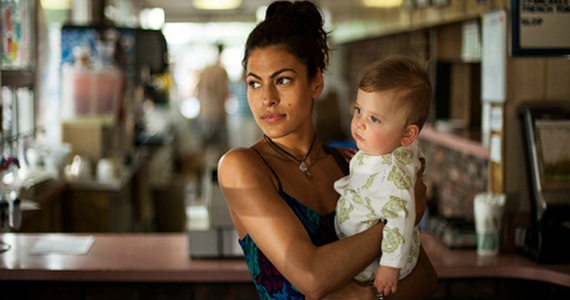 The third act deals with the kids grown up and we find out the connection. The actors did a great job portraying messed up teens in society, but I started getting annoyed with the parenting. These kids are caught with drugs, arrested, and yet they still go out and do the same shit over and over. I know my parents either would have locked me in the house or beaten the shit out of me if I kept being a fuck up. I was somewhat happy with the way the story ended, but still trying to figure out if I liked the ending.

Final thoughts: I’m giving The Place Beyond the Pines 3 out of 4 angels.  I went to see this film in one of the select theaters it’s playing at for $15. Good thing is, I do not regret spending that money when I could just buy it on blu-ray at that point for about the same price. The movie is long, it is slow at times, but it doesn’t make the movie bad by any means. It is something totally different from anything I’ve seen in theaters over the past year or so (excluding Spring Breakers cause that was….whoa) so I would definitely see it when it opens up to a wider range of theaters. The acting is great and Gosling’s story is awesome.

This is my first review, hopefully with many more to come. Thanks for reading!