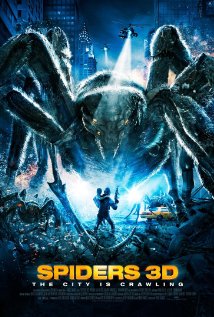 I have to admit, I have a fondness for “fake” movies – movies populated by either no-names or yesterday’s almost-stars and made quickly to cash in on a trend or title. They’re made cheaply, but with just enough slickness to cover the fact that they’re using the same sets over and over. These are not popcorn movies, these are the unpopped duds left at the bottom of your greasy bag.  When I was a kid, fake movies were in the theater right alongside the real ones. Charlie Band flicks such as GHOULIES and ELIMINATORS played right alongside Robert Redford’s OUT OF AFRICA. Most of the kids preferred the fake movies because they delivered monsters, guns, explosions, corny jokes and the occasional tit shot.  In recent years, they’ve disappeared from the big screen, relegated to the direct to DVD market before finding a permanent home on the SyFy channel. With their downgrade of size and status, fake movies have become a little too fake, a little too predictable, lacking the magic and fun they once had. SPIDERS, through some sort of fluke, is a fake movie that’s getting a theatrical release. Whether market research has deemed this type of material ready for a comeback or if this is some type of planned failure to be written off as a loss, we may never know. But what I do know is, this is one of the most bullshit looking movies I’ve seen get a theatrical release since the 80s, and I’m first in line. END_OF_DOCUMENT_TOKEN_TO_BE_REPLACED