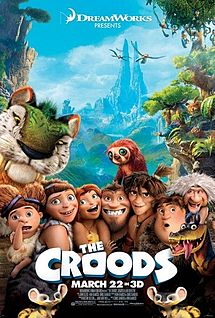 It’s not too often that I’m wowed by a cartoon.  Gone are the days of the Pixar “slam dunk” (in my opinion).  More often than not, I find myself annoyed by an animated film – like say, Shrek that uses some catchy pop song and then has the characters dancing around like assholes almost as a concession for not having them sing a la OG Disney films.  To quote Mike “Green Ogre Slob” Myers: It’s craaaaap! Which is exactly the reason I was DREADING “The Croods”, Dreamworks’ latest computer generated feature.  After seeing countless bus shelters, mass transit wraparounds and AMC policy bumpers all featuring the cave-clan, I wanted to smash my head in with a rock (which was probably used as both a pillow and a dental tool in their day).  But after seeing the film in glorious 3D, I have to say that I haven’t been this happy to spend time with cartoon cavemen since “The Flintstones”. END_OF_DOCUMENT_TOKEN_TO_BE_REPLACED