In 1979, “Alien” redifined the horror genre. It’s tag line: “In space no one can hear you scream.” For nearly 35 years, it’s been the gold standard for I’m-trapped-with-a-monster-in-closed-spaces movies; often imitated and never duplicated. Films like “Deepstar Six” and “Jason X” obviously ripped off the idea, while everything from “Spaceballs” to the “Space Quest” game series have included nods to the classic. To kick off our St. Patrick’s Week, Cinema Judgement Day takes a look at yet another “Alien” knockoff: “Leprechaun 4: In Space”. ***PLEASE NOTE: This film is most enjoyable with copious amounts of green beer and a frontal lobotomy.***

The film starts out on a distant mining planet where somehow our Leprechaun (Warwick Davis) now exists. He plans to steal the world’s gold by kidnapping and marrying the Princess, then killing off the planet’s King. The plan goes wrong, however, when the space marines arrive and blow the little bastard to bits. In perhaps the most realistic scene in the film, one soldier decides to mark celebrate his kill by taking a leak on the Leprechaun’s remains. Bad idea. The Leprechaun’s spirit, or essence, or odor travels up the man’s urine stream and into his body. Later that night, when Mr. Peebody is about to have sex with one of the female marines, a resurrected Leprechaun bursts out from his genitals. After that, it’s open season on the soldier boys as one by one, our tiny green gold monger takes them out in moderately creative ways. Now it’s up to Books and Sticks, two marines who apparently hate real names and the sexy/smart Dr. Tina Reeves to stop the Leprechaun with their brawn and boo, er brains. 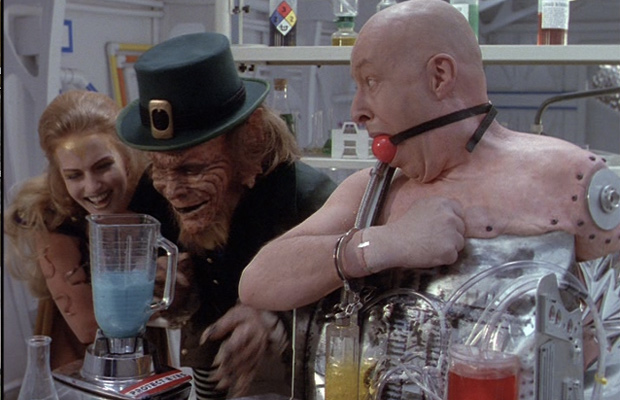 This blue milk is fromm an old family recipe – sent in courtesy of Beru Lars.

It actually doesn’t sound that bad, but it is. The Leprechaun has ditched his lyrical stylings in this picture, hardly ever rhyming as he gets his revenge. While he may be quick with the jokes, they all seem to have been written by failed vaudevillians. Worse than being not funny, none of the scenes are very inspired or memorable. Some of the deaths look like they were pulled from old cartoons and aren’t particularly gory. One crew member is flattened by what looks like an intergalactic refrigerator, while another is hit in the face with some sort of lid. Of course when the lid drops, his head is flattened into the same circular shape. The sets are obviously on a soundstage with cheesy colored lights and piping to make it look like a space ship. At times, you can tell that entire walls are made up of storage cubes and milk cartons. With an estimated $1.6 million budget, the money must’ve gone somewhere, right? Maybe the VFX?

Nope. The effects are pretty lame, even for the time it was made. “Leprechaun 4″ was made in 1997, around the tail end of “Babylon 5″ and the effects are barely on par with it. You would think a television series would have cheesier graphics than a straight-to-video feature, right? Especially when you consider the fun of the first film in the franchise. Apparently Trimark just didn’t care or maybe they didn’t want to sink more money into this stinker.

After this scene, there was no money left. Cast and crew starved to death 4 days later, as catering isn’t free.

But to be fair, some of the makeup effects are pretty cool. Towards the end of the film, the Leprechaun creates a mutant spider creature (don’t ask) and it looks like 60% of the budget ended up in this creation. Another 30% may have been spent on a human connected to cyborg-like life-support system. Aside from the awful jokes and weak dialogue, the story certainly could’ve been worse. The idea is funny and I’m sure it sounded great at the pitch. While the casting isn’t the best, the actors are competent enough to be taken kind of seriously. However the film’s problems lie in the execution. Director Brian Trenchard-Smith (perhaps best known for “Night of the Demons 2″ and the Nicole Kidman movie “BMX Bandits”) is given weak ingredients and in turn presents a weak dish.

The DVD is pretty bare bones with only the movie’s trailer and an Easter egg containing the trailer from every Leprechaun film up through “Leprechaun in the Hood”. The picture quality is exactly what you’d expect from straight-to-video fare with the film looking like high end video (even though it was shot on 35mm).

I’m bumping “Leprechaun 4: In Space” up to 1.5 out of 4 Devils only because the filmmakers included the topless scenes that so often elude this type of film today. With cheap sets, lousy effects and an unmemorable script, the movie never lives up to its potential. I wonder if the old saying is true: “In space no one can here you fidget in your seat.”